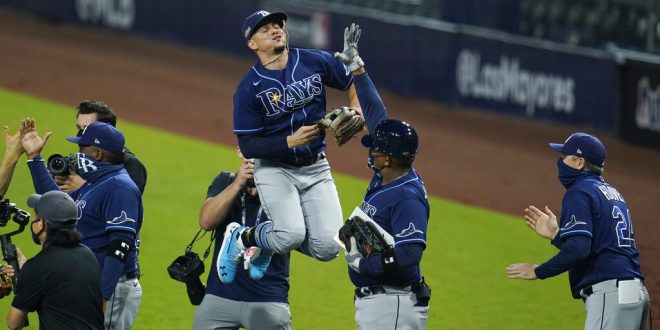 The Tampa Bay Rays have pushed the New York Yankees to the brink of elimination.

With an 8-4 victory over the Yankees Wednesday night, Tampa needs just one more win to move within one win of reaching the AL Championship Series for the first time in 12 years. An appearance in the ALCS would also be the Ray’s first since appearing in the 2008 World Series.

The Rays were able to go up early in Game 3, with a three-hit second inning that brought home a run. The Yankees tied it up 1-1 in the bottom of the third, but the Rays really got going after Kevin Kiermaier hit a three-run homer in the next inning.

That would not be the only home run of the night for Tampa either. The Rays lit up Yankees’ starter Masahiro Tanaka with eight runs on 13 hits with two more home runs. The Rays tacked on another two runs in the fifth thanks to Randy Arozarena and kept control of the game 5-2.

Adding to the damage, Tampa scored another three runs on three hits in the top of the sixth. Giancarlo Stanton tried to close the gap with a two-run homer in the bottom of the eighth off Shane McClanahan who made his MLB debut in Game 1, but it was too little too late for the Yankees.

Stanton did however become the first player with a home run in each of his team’s first five games of a single postseason. He has six homers and 13 RBI in those five games.

The Rays offensive outburst was huge in Game 3, but manager Kevin Cash says he was not surprised by it.

The Rays may not know what Game 4 will bring, but they can be certain about one thing; Arozarena is red hot. Arozarena, a 25-year-old rookie from Havana, is making his presence known in the postseason.

Last night marked his third straight game with a home run. Arozarena homered off Yankees ace Gerrit Cole in Game 1, and again in Game 2 against rookie Deivi Garcia. His teammates have also taken notice of his outstanding performance.

If anything, this series can confirm that it takes a good pitching staff to succeed in the postseason.

The Yankees started the ALDS with a win with ace Cole on the mound. To earn the win in Game 1, he went six innings, allowing three runs and six hits while striking out eight and walking two.

Tanaka is typically the Yankees No. 2 pitcher, however, New York went with a fresher face for Game 2 in Garcia. At just 21-years-old, Garcia became the youngest Yankees pitcher to make a postseason start. It was a short outing though for Garcia, pitching for just one inning with one earned run.

For Game 3, the Yankees brought back their No. 2 in Tanaka, but his outing did not go as well as they hoped. Tanaka went four innings, giving up eight hits, five earned runs, one walk and just four strikeouts. However, manager Aaron Boone believes Tanaka still made some pretty big outs for the Yankees.

If the Yankees can stretch the series to Game 5, Cole could make a reappearance on the mound. However, they have to get through Game 4 first, and LHP Jordan Montgomery will make his postseason debut. He went 2/3 with a 5.11 ERA in 10 regular-season starts this year.

The Rays, on the other hand, have shown nothing but dominance on the mound.

Even though Game 1 ended in a loss, Blake Snell has anything but a bad outing. The 2018 AL Cy Young Award Winner pitched five innings and allowed four runs on six hits while striking out four and walking two.

With bats and pitching working, the next outing for the Rays proved more successful. Altogether, 4 Tampa pitchers combined for an MLB postseason record for a nine-inning game 18 strikeouts, but it was starter Tyler Glasnow who picked up the win. Glasnow went five-plus innings and allowed three hits and four runs, walking three. His 10 strikeouts surpass the previous Rays postseason record of nine, done three times.

Charlie Morton brought another dominant start for the Rays in Game 3. He went five innings and gave up just four hits with one earned run, six strikeouts and two walks.

For Game 4, the Rays will start RHP Ryan Thompson. This will be his third appearance of the postseason, giving up no runs in three-plus innings.