Home / MLB / Oakland Athletics Are Down But Not Out 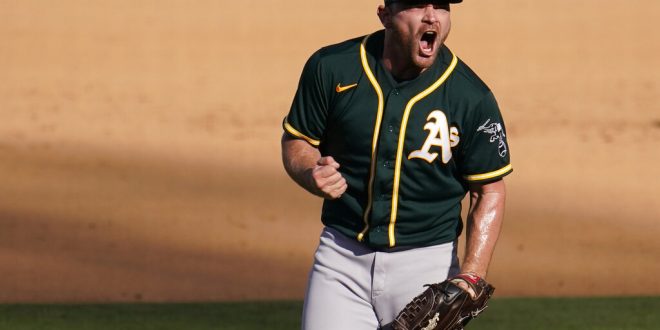 Oakland Athletics Are Down But Not Out

The Oakland Athletics coming into Wednesday’s game against the Houston Astros were down two games to none in a best of five series. Oakland’s hope of moving on to the ALCS remained alive after defeating Houston 9-7 after five runs late in the game.

Oakland took the early lead from the bat of Tommy La Stella on the seventh pitch of the game. La Stella ended the day going two for three with two runs and an RBI. The lead quickly diminished when Houston scored two in the first inning off three hits and a home run.

Mark Canha, Matt Olsen, and Marcus Semien all hit solo shots in separate innings giving Oakland the 4-2 lead. Unfortunately, the two-run lead did not hold up for very long.

The three home runs off Jose Urquidy did not keep the Astros down. In the bottom of the fifth, Houston put up five funs to take back a 7-4 lead. Once Yuli Gurriel walked, Aledmys Diaz brought him home with a bomb to the left-field fence.

At that point, the flood gates were opened. The Athletics relieved starting pitcher Jesus Luzardo with one out on the board. This would not be the last change on the mound before the inning was over.

Yusmeiro Petit hit the first batter he faced after relieving Luzardo. It did not stop there as Jose Altuve singled to put two runners on first and second with no outs. Altuve went three for five and an RBI. The very next batter, Michael Brantley, on the first pitch also singled scoring one. Brantley was rewarded immediately when Alex Bregman doubled to deep left adding another run. Oakland’s pitcher Petit saw his last batter intentionally walked to first before being replaced. Petit recorded one out on an Altuve throw out at third.

The season was on the line for the Athletics down by four late in the game. Both teams held scoreless in the seventh but Oakland tied the game up in the eighth. It came quickly as Semien and La Stella got on base with no outs in the inning. Immediately following, Chad Pinder with one swing tied the game up. Pinder had himself a day going three for four and four RBIs.

You can always count on Chad #RepTheTown x @BankofAmerica pic.twitter.com/LZgc8rq62p

Similarly in the eight, the first two batters for Oakland found their way on base via a walk and a double. Sean Murphy grabbed the lead and the game-winning run on a sacrifice fly to right field. Pinder also hit a sacrifice fly later in the inning for some insurance. Oakland with a 9-7 lead going into the bottom of the eighth.

The lead stood with Diekman and Liam Hendricks holding the Astros to zero runs the rest of the game. Hendricks earned the win while striking out four in three innings pitched.

Houston Has Another Shot

The Astros will have another chance at advancing to the ALCS for the fourth year in a row. Game 4 is scheduled for Thursday at 3:35. Houston still leads the series 2-1 and needs just one win to move on. The Athletics losing the first two has them looking at an uphill battle. They fought off elimination on Wednesday, can they win two straight for their chance to go to their first ALCS appearance since 2006?