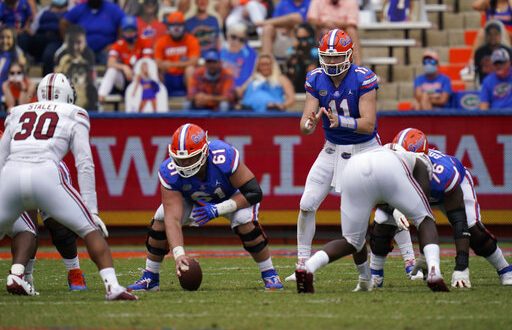 Florida quarterback Kyle Trask (11) call signals for a play during the second half of an NCAA college football game against South Carolina, Saturday, Oct. 3, 2020, in Gainesville, Fla. (AP Photo/John Raoux,Pool)

The No. 10 Florida Gators are no strangers to a successful offense ran under head coach Dan Mullen. A quick trip to the Swamp will showcase the 2006 and 2008 National Championships Mullen won during his tenure as offensive coordinator for the Gators.

However, that was over a decade ago and the expectations for the Florida offense remain high.

Florida Offense By The Numbers

Current offensive coordinator Brian Johnson and company are producing the numbers to reflect this championship mentality.

Quarterback Kyle Trask has been a driving force for the success of the Florida offense. Furthermore, Trask has thrown for just shy of 1,000 yards and 14 touchdowns.

Johnson commented on Trask’s ability to be ready when his number is called.

The Kyle to Kyle connection is a constant for the Florida offense. Tight end Kyle Pitts has recorded seven touchdowns on 17 receptions.

Kyle Pitts has more TDs through three games this season than he did in his previous 24 games 😳 pic.twitter.com/lUTJYfcwQg

The talent for the Florida offense extends beyond their dynamic Kyle and Kyle duo.

The running back trio of Dameon Pierce, Malik Davis and Nay’Quan Wright have proved to be an asset for this Johnson-led offense. Furthermore, Pierce leads the Gators with 137 rushing yards and one touchdown on the season.

Johnson notes the unique skill set of the Florida running backs has allowed the Gators to find a balance within their run game.

Beyond the run game, the trio has proven to be playmakers in the Gators’ passing game. Trask has thrown to Davis eight times for a total 118 yards.

Kadarius Toney is one of the most versatile players on the Florida roster. Toney originally entered the recruiting process as a dual-threat quarterback.

During his time at Florida, Toney has started as a wide receiver and running back. In addition, he has played a role as a wildcat quarterback.

This season, Toney has already posted 237 yards and four touchdowns.

Locked in on LSU

Johnson and the Florida offense return to the field on Saturday afternoon for a matchup with LSU. The Gators will kickoff against defending National Champions at 4 p.m. in the Swamp.