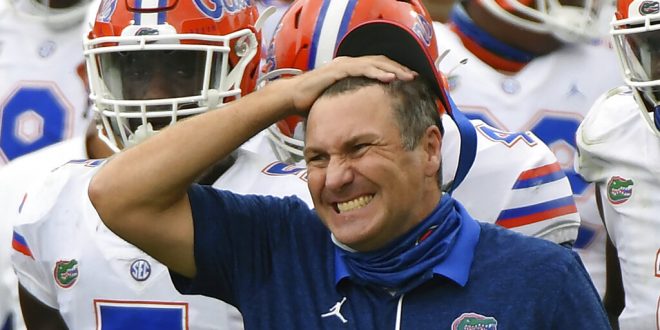 A calamitous weekend for Gator football made one thing clear during Dan Mullen’s weekly press conference; he’s preparing for LSU.

Another struggle on defense

Disregarding Mullen’s comments about stadium capacity briefly, Florida’s loss on Saturday highlighted many of their issues. Once again, the Gators flourished on offense. Kyle Trask threw four touchdowns again, Kyle Pitts caught another touchdown and Kadarius Toney got involved with two receiving touchdowns of his own. Any time an offense puts up 38 points and over 400 yards of total offense, you think it is a good shot they come out with the victory.

However, it was the same old song and dance for the Todd Grantham-led unit on Saturday.

The Aggies of Texas A&M played by far their best offensive game of the season. Their 41 points equaled their combined total through the first two weeks of the season. Kellen Mond carved up the Gators secondary for 338 yards passing and three touchdowns. On the ground, lead Aggie running back Isaiah Spiller turned 27 carries into 174 yards and two touchdowns. Mullen says these gaudy numbers do reflect poor defense, but they represent great offense just as much.

In Monday’s press conference, Mullen said he trusts the current staff he has in Gainesville and the scheme they developed. However, the issue comes from execution. He wants to ensure that defensive players can be in the right spot. Mullen wants to highlight his players’ skills while hiding their weaknesses.

While many fans in Gator Nation might be calling for Grantham to lose his job, it appears the defensive evaluation Mullen mentioned following the loss excludes the veteran-defensive coordinator. Regardless, Grantham and Mullen will have to switch things up with a ravenous LSU side reeling with a 1-2 record.

After the loss to Texas A&M, Mullen made headlines when he talked about the atmosphere at Kyle Field. He controversially mentioned Florida Governor Ron DeSantis allowing stadiums to return to full capacity.

Mullen wants a packed house at The Swamp next week vs. LSU: "So I certainly hope our university administration follows the governor." #GoGators pic.twitter.com/rlXLGBu1mq

During his press conference, Mullen had one simple answer when someone asked about his comments on Saturday.

Mullen did compliment the efforts of the medical teams for UF and their ability to practice safe gamedays during the COVID-19 pandemic. Mullen also mentioned having the 20 percent capacity Ben Hill Griffin Stadium stay lively during the game to have a similar effect to Texas A&M.

Moving that aside, a tough opponent comes to Gainesville this upcoming Saturday, LSU. Even if the Tigers are 1-2 and coming off a loss to Missouri,  Mullen says they still can be dangerous offensively, and his team must continue preparing his defense if he wants to come out victorious.

Through three weeks, the LSU’s statistics are eerily similar to those of the Gators. LSU averages 467 yards of offense per game, Florida averages 464. The Tigers give up 495 yards per game, the Gators also give up 495. LSU’s average points for is 38.7, Florida’s is 42.3. And, finally, LSU allows 32 points per game, while Florida allows 33.3. That numbers are almost too close to call made-up, and they provide all the makings of a close, high-scoring affair.

Despite the Florida opening as a large favorite (-14), it is not out of the realm of question to see the Gators in another shootout. This season, those vaunted SEC defenses have liked devoid of ability. Much like the Texas A&M game, we could very well see a victor decided based on whoever has the last possession of the game.

Originally from Seminole in the Tampa Bay area, Kyle is a contributor for ESPN Gainesville as well as local NPR and PBS affiliate WUFT. Kyle wants to get into sports with a lofty dream of being a sports broadcaster. He was raised playing soccer and baseball while watching hockey and football, so the knowledge about various sports is fairly extensive.
@KyleFanslerUF
Previous Falcons Fire Head Coach Dan Quinn after 0-5 start
Next Drew Brees and the New Orleans Saints face Los Angeles Chargers in Monday Night Football