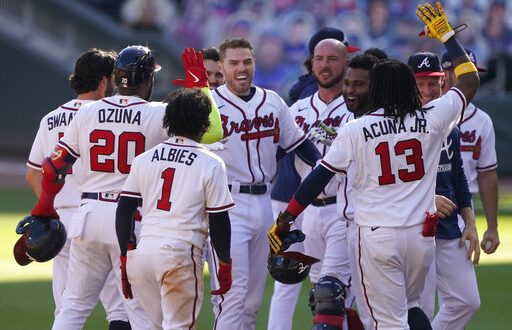 Game 1 of the NLCS between the Atlanta Braves and the Los Angeles Dodgers was a tight one heading into the final 9th inning frame. That was until the Braves’ nine-hole hitter Austin Riley had something to say about it.

With the crack of a bat, a ball was launched 448 feet into the air and at a blistering 109 mph. Riley had changed the game for Atlanta.

For the lead. #NLCS pic.twitter.com/plSzfulh7a

And for the first time this season, a crowd erupted. Not cardboard cutouts or augmented stadium noise. Living, breathing people, jubilantly shouted down toward the diamond as Riley thumped his feet into the bases — first, second, third and home. Atlanta was on top.

The Braves win marked their sixth consecutive win of the postseason and have yet to mark a loss on their ledger thus far in the postseason. After the Dodger’s Monday night loss, the Braves took sole ownership of being the only undefeated team left in the 2020 postseason.

A powerful Atlanta lineup is a strength of the team that most expected would pay dividends in October baseball. However, it’s been the dominant pitching that has been the X-factor for the Braves in helping them mow down their national league opponents.

The Braves’ Max Fried posted nine strikeouts of one-run baseball in his performance on Monday night before turning things over to his bullpen. The 26-year-old has pitched a 2.65 ERA thus far this postseason across three starts.

The Braves six-game sprint this postseason has included four shutouts of their opponent. They have trailed in a game in just four of their 58 innings played thus far.

Despite fighting a blister on his right index finger, Dodgers’ Walker Buehler was able to hurl five innings of one-run baseball while striking out seven batters.

That looks like a bad blister, and did we need the close-up on that? pic.twitter.com/bQRpjPgiqU

It wasn’t all pretty though, as the right-hander surrendered five walks on the evening and exited the game with runners on first and second without recording an out in the 6th in a tie ball game.

Fortunately for the Dodgers, RHP Brusdar Graterol needed just six pitches in relief to get Los Angeles out of the jam and keep the Dodgers’ in the game.

The Braves clawed back with a four-run 9th inning to outlast the Dodgers.

Dodgers ace Clayton Kershaw had been slated to start Game 2 but has been ruled out with back spasms. The Dodgers will look callous over the loss and even the series at 1 when they throw Tony Gonsolin out on the mound in Game 2.

For the first time this season, it was more than just players, coaches and cardboard cutouts who were witness to the Braves’ late-inning magic.

Braves first base slugger Freddie Freeman said the team felt energized by the over 10,000 fans who showed up on Monday night.

Up to another 11,500 fans will funnel into Globe Life Park for Game 2 of the NLCS when the Braves and Dodgers battle it out again on Tuesday night at 6 p.m. ET.