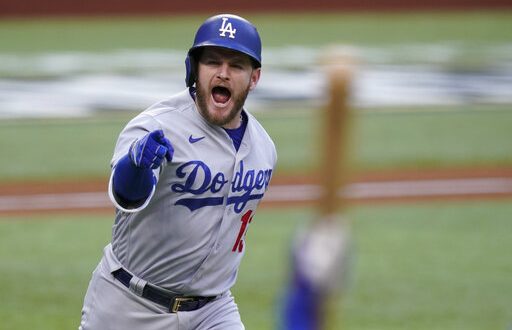 The Los Angeles Dodgers didn’t let being down 2-0 to the Atlanta Braves stop them from putting a beating down in Game 3. A historic first inning propelled Los Angeles to a 15-3 victory.

In the first two games of the series, the mighty Dodgers lineup has scored a combined eight runs. Los Angeles matched those eight runs and a little extra in just one inning. No team has ever scored 11 runs in any postseason inning.

From the jump, Mookie Betts led off with a single and came home to score when Corey Seager doubled to left-center. Wright seemed to settle in when he got the next two batters out.

However, with two outs on the board, Los Angeles did most of their work. Another double scored Seager while putting two runners on base. Joc Pederson brought them all home with one swing of the bat.

On the very next pitch, Edwin Rios drove a fastball over the center-field fence. Atlanta down 6-0 decided to end Wright’s day on the mound.

New pitcher, Grant Dayton did not perform any better. Dayton’s first three batters walked, singled and hit by a pitch loading the bases. Max Muncy crushed the third home run of the inning giving the Dodgers the decisive 11-0 lead after just one inning.

As it turns out the 11 runs in the first inning are all the runs the Dodgers needed to win the game. But, they tacked on four more runs in the next two innings for some insurance. In the second, the lone run was off the bat of Cody Bellinger for the team’s fourth home run of the day. The fifth home run came in the next inning.

A Cristian Pache solo shot in the bottom of the third finally got the Braves on the board. At the end of three innings, Los Angeles led 15-1 thanks in large part to the offense.

Additionally, a great pitching performance out of Julio Urias aided to the Dodgers big game. Urias pitched five innings allowing just one earned run on three hits. The Braves fought in the ninth grabbing two additional runs but that is all they got.

The Dodgers winning Game 3 was huge for them, going down 0-3 is a tough hole to climb out. The Game 4 pitching matchup between Clayton Kershaw and Bryse Wilson appears favorable for Los Angeles to tie the series. Wilson has only pitched a little over 15 innings this season while Kershaw is a veteran.

Also, the offense showed life hitting five home runs and scoring 15 runs in three innings show. Atlanta may have unleashed the beast that could be tough to contain for the rest of the series.

Can the Dodger’s batters stay hot to keep their World Series hopes alive? Will the Brave’s lack of pitching depth be the reason they fall short? Game 4 is scheduled for Oct. 15 at 8:08 pm.