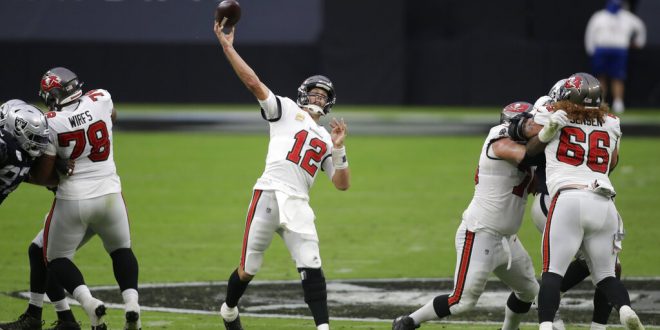 The Tampa Bay Buccaneers’ signal-caller threw for 369 yards and four touchdowns in Sunday’s 45-20 stomping of the Las Vegas Raiders. He also added a rushing score.

Additionally, Brady eclipsed Drew Brees in career touchdown passes. His fourth of the day was number 559 — one more than Brees.

The Raiders jumped out to a 7-0 lead as Nelson Agholor made an acrobatic grab for a 20-yard score. Tampa Bay answered more quickly than it did against the Packers. Brady converted his trademark QB-sneak at the goal line to tie the game.

Later in the second quarter, Rob Gronkowski hauled in a five yard touchdown to give the Bucs the lead. Then, Scotty Miller made an over-the-shoulder catch at the back corner of the end zone that was nothing short of poetic. Miller’s 33-yard score came with only 17 seconds remaining in the half.

Las Vegas kept it close. Derek Carr threaded one to Darren Waller from a yard out for a third-quarter score. The Raiders trailed by only four early in the fourth quarter.

But a Chris Godwin touchdown gave the Bucs a bit more cushion. Tampa Bay made a key defensive play on the Raiders’ following possession as rookie safety Antoine Winfield Jr. recorded his first career interception after a pass bounced off of the hands of Agholor.

Wide receiver Antonio Brown is expected to officially sign with the Bucs Monday. He has a one-year deal worth up to $2.5 million.

The Bucs (5-2) will be without Brown, who is still serving an eight-game suspension, against the reeling New York Giants (1-6) on Monday Night Football. Meanwhile, the Raiders (3-3) travel to Cleveland Sunday to face the Browns (5-2).