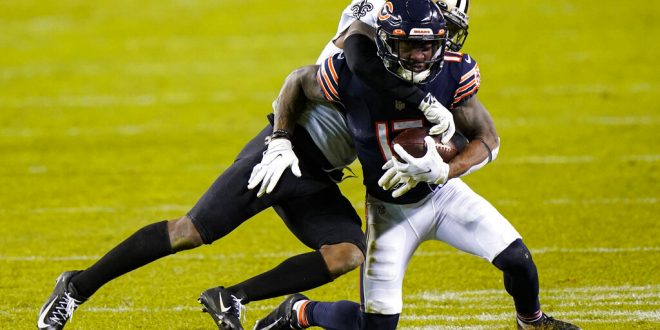 Gardner-Johnson Notches Yet Another Brawl Under His Belt

Chauncey Gardner-Johnson, former Gator and current Saints cornerback, has earned himself quite the reputation in the NFL.

Now, however, he’s got something new to add to his repertoire.

How Did We Get Here?

The Chicago Bears entered Sunday’s game against the New Orleans Saints as one of the stronger defensive teams in the NFL.

Allowing the fewest touchdown passes (six) in the league, the Bears were projected to produce a dominant performance.

Even so, no one expected Bears wide receiver Javon Wims to sucker punch Gardner-Johnson after Bears QB Nick Foles completed a five-yard pass to Allen Robinson in the third quarter.

But a sucker punch it was.

Wims snatched Gardner-Johnson’s chain off his neck, then punched him a few times.

Initially, Gardner-Johnson didn’t react, likely because he was wearing a helmet.

Wims then delivered an open-handed slap to the front of Gardner-Johnson’s face mask right before Saints cornerback Janoris Jenkins jumped in the fray, per ESPN’s Jeff Dickerson.

Soon enough, however, a brawl broke out.

A Tale of True or False.

When asked what led to the act of aggression, Wims alleged that Gardner-Johnson spat on him and also claims that the Saints CB ripped out his mouthpiece.

Currently, there is no video footage available to confirm this. What fans do have, though, is a play-by-play breakdown of the fight that appears to be circulating Twitter.

THREAD: My Zapruder breakdown of the Chauncey Gardner-Johnson/Javon Wims beef.

It begins on this play on the Bears’ first possession of the second half. After exchanging some words, CJGJ rips Wims’ mouthpiece off and it falls onto the ground. pic.twitter.com/wwQgcbKdJ5

Wims was ejected in the third quarter and flagged for unsportsmanlike conduct.

On the next play, Nick Foles threw an interception.

Ultimately, the effort displayed on both ends resulted in a 26-23 overtime loss for the Bears.

According to the NFL, VP of Football Operations Jon Runyan issued Wims’ suspension, ruling that the Bears receiver had violated a league rule that prohibits “striking, swinging at or clubbing the head, neck or face of an opponent,” as well as violating sportsmanship rules in the league’s bylaws, per NBC Chicago.

#Bears WR Javon Wims is suspended two games for punching #Saints Chauncey Gardner-Johnson in his helmet, which got him ejected and caused craziness on the field.

As for Gardner-Johnson, he claims he is innocent. Even though sources (and cameras) caught him antagonizing Bears receiver Anthony Miller on previous plays and ripping out Wims’ mouthpiece.