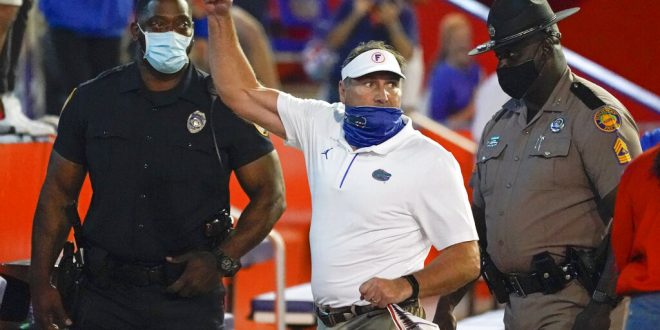 Florida head coach Dan Mullen, center, raises his fist to cheering Florida fans after an argument at the end of the first half as he was escorted to the locker room by law enforcement officers during an NCAA college football game against Missouri, Saturday, Oct. 31, 2020, in Gainesville, Fla. (AP Photo/John Raoux)

We are less than a week away from the unofficial World’s Largest Outdoor Cocktail Party. The Florida Gators will travel an hour and change north to Jacksonville to face the Georgia Bulldogs.

In a case of broken tradition, the Gators are coming off a win against Mizzou instead of a traditional bye week. Georgia did not have a bye week as well. They played Kentucky on Halloween, beating them 14-3.

The Gators have not beaten Georgia since 2016–that was under Jim McElwain. The losing streak has bled into Mullen’s tenure at command of Florida football. Mullen said in his presser that he does not think that the prior games have an impact on Saturday.

Mullen added later on that the winner of this game is “in the driver’s seat” for the race to the SEC Championship game.

One thing has changed since the last meet in Jacksonville. Quarterback Kyle Trask has stepped it up. Trask has had more touchdown passes in his first four games than any other quarterback in SEC history (18).

When asked if Trask taking it to the next level could have an impact on the Florida-Georgia, Mullen said he thinks it could.

In the game against Mizzou, the Gators’ defense started to see a return to form. They held the Tiger’s offense to just 10 points (the other seven were scored by the defense). On top of that, the defense held Mizzou to 248 total yards, which includes just 40 rushing yards.

But this was just one game. The other three were games where the defense heavily struggled, and there were not three weeks to prepare for a game. Mullen did say the defense saw improvements in areas such as missed tackles. However, Georgia’s offense will have something to say about if the defense really has come together yet.

Harrison is a sports coordinator at ESPN 98.1 FM/850 AM WRUF. He served as a beat writer for Florida Gators football for the 2019 and 2020 seasons. He also contributes to WRUF's Gainesville Sports Center segments and makes appearances on the Clash on Harp on Sports. Harrison has been a content writer for WRUF since January 2019 as well.
@HarrisonSmaj
Previous Gators Women’s Swimming and Diving Looks to Make Big Splash
Next 16 Team Playoff a Possibility For NFL