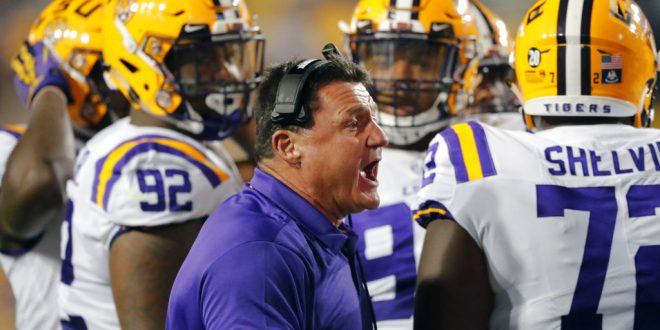 LSU head coach Ed Orgeron talks to his team during a timeout in the second half of an NCAA college football game against Southeastern Louisiana in Baton Rouge, La., Saturday, Sept. 8, 2018. LSU won 31-0. (AP Photo/Gerald Herbert)

LSU looks to get back on track after Bye Week

After earning their fourth national title in school history, the LSU Tigers haven’t been able to match their 2019 performance. The star-studded roster lost 14 total players to the NFL Draft, including starting QB Joe Burrow. LSU’s 14 players drafted were the most by any school and tied the NFL Draft record for most players selected.

The Tigers opened the season with a 2-3 record for the first time under head coach Ed Orgeron. With losses coming to Mississippi State, Missouri and Auburn, their schedule will only continue to strengthen as they battle the No. 2 ranked Alabama in Death Valley. The Crimson Tide enter the week 11 matchup with an undefeated record of 6-0.

Meanwhile, starting quarterback Myles Brennan may not return to action versus Alabama. Brennan suffered a significant lower-body injury in the Tigers’ 45-41 loss to Missouri, keeping him sidelined for multiple weeks. LSU’s QB competition remains open over their bye week to see who will start under center against the Tide.

In an SEC coaches press conference early Wednesday morning, LSU head coach Ed Orgeron was asked how the team is dealing with their problems heading into the second half of the season.

“It’s very challenging right now but we gotta fix us though. There’s a lot of mistakes. We gotta coach better number one, play better, but there’s a lot of new players who gotta learn that in the SEC you gotta come every game ready to play.”

LSU hopes to clean up their errors prior to hosting Alabama at home next week. The SEC showdown is set to kickoff at 6:00 p.m. on CBS.

Angel is a student at the University of Florida. She is a Multimedia Journalist who is currently a Sports Reporter and Writer at ESPN Gainesville. Follow her on Twitter (@angelcwells) and Instagram (@angel_wells). Be sure to follow her NFL Twitter account to stay up to date with the latest NFL news. (@UpToDate1NFL)
@angelcwells
Previous Gator Baseball Starts Fall Ball
Next Alabama Hits Bye Unbeaten