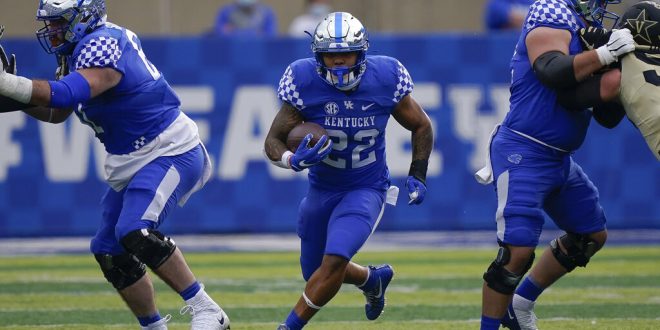 CORRECTS NAME AND POSITION TO RUNNING BACK CHRIS RODRIGUEZ INSTEAD OF LINEBACKER CHRIS OATS - Kentucky running back Chris Rodriguez, center, runs with the ball during the first half of an NCAA college football game against Vanderbilt, Saturday, Nov. 14, 2020, in Lexington, Ky. (AP Photo/Bryan Woolston)

Alabama Set to Take on Kentucky

After playing an emotional game last weekend, playing in honor of John Schlarman, Kentucky travels to Tuscaloosa to take on the undefeated Alabama Crimson Tide.

A game to be won in the trenches

The Crimson Tide hit the field again this weekend after their game against LSU was postponed due to COVID-19 concerns in the Tigers’ program. Once again, Alabama looks like one of, if not the, best teams in college football. The defense is playing at a high level while Mac Jones is having a Heisman-caliber season. Here’s what Kentucky Head Coach Mark Stoops had to say about facing this tough Crimson Tide team.

Alabama’s offense has been potent all season long but could be in for a challenge this week. The Kentucky defense allows the second least points per game in the conference and gives up the least amount of passing yards per game in the SEC. As a result, Nick Saban could lean on his offensive line and rely on the running game this week. Stoops says facing this Alabama running backs is an additional challenge.

Linebackers Jamar Watson and Jamin Davis will need to play big roles for the Wildcats if they’re to pull off the upset. Watson leads the team in sacks with 3.5 while Davis has a team-high 37 tackles. Kentucky is excellent against the pass but struggles to stop the run. This is why Stoops put such a big emphasis on slowing down the Crimson Tide running game. In addition, Stoops says he needs his defense to play with more consistency.

Consistency must come on both sides of the ball, though. Quarterback Terry Wilson has had an up-and-down season totaling just over 1,000 yards to go along with 10 total touchdowns but just one interception. In addition, according to Caesars Sportsbook, Alabama is favored by 30.5 points.

On Nov. 12, Kentucky assistant coach John Schlarman passed away at 45 after a two year battle with cancer. He was also a member of the Wildcats’ football from 1994-1997 as an All-SEC offensive lineman. In honor of Schlarman, the Wildcats took a penalty in their win against Vanderbilt while keeping his old positional spot empty during the play.

The Wildcats will face an uphill battle this weekend but are hoping to put on a display that many experts don’t expect. Maybe with the spirit of their old coach, Kentucky could pull off something special.

Three weeks ago, in his last game on the sideline, UK Football and John Schlarman beat Tennessee and had this special moment pic.twitter.com/XxYvKL3JWA