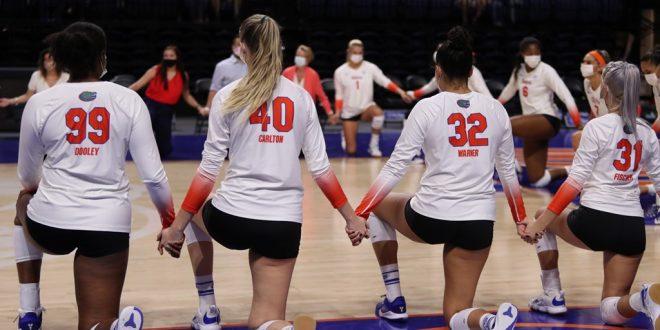 Scenes from the Gators' 3-0 win against the Crimson Tide on October 30, 2020. Photo by Jessica Seldner

Florida Gator Volleyball fell to the Georgia Bulldogs Friday night in Game 1 of their two-match series this weekend. A tightly contested match ultimately ended in Georgia’s favor. The Gators will look to bounce back Saturday in their final match of the season at 5 p.m.

Florida started the match strongly in set 1 with aggressive intentions. The Gators introduced a lead early on and kept the ball in system overall. Although, Georgia’s rhythm made changes and was able to close the gap and tie the game up 18-18. A back-and-forth scenario soon took the storyline. Additionally, Head Coach Mary Wise found herself challenging multiple calls made by the down ref before the set was over. Ultimately, the Georgia Bulldogs were able to pull through and win the first set at 25 to 21. Florida registered 12 kills and 20 digs in their first set.

The Gators entered the second set hoping to bounce back. The set continued a tightly contested theme. Georgia could not pull away from the Gators until they went on a scoring run and grabbed the 15-13 lead which they maintained up until the very end. The second set solidified the sense that Florida’s offense was not clicking into a rhythm like it usually does. The Gators lost set 2 at 25-8. In one of the few times of this season, Gators concluded a set with a negative hitting percentage.

The Gators enter the third set down 2-0 and need to implement some serious adjustments. The Gators established an early lead immediately and contested yet another call. Georgia was able to trim the lead down some and the Gators only held two points ahead until breaking away right at the end and concluding the set at 25-19. The Gators were able to force a fourth set and keep the match alive. On the leaderboard thus far is Thayer Hall will 11 kills and 6 digs. In addition, Setter Marlie Monserez recorded 23 assists.

The fourth set immediately established itself as yet another dramatic back-and-forth affair. At the final point made by Georgia, Head Coach Mary Wise challenged another call. Several long minutes passed before the refs revealed that Florida did indeed make a blocking error and Georgia won the final set at 25-23.

Overall, Florida was able to register 48 kills,  and 63 digs. Meanwhile, Georgia recorded fewer numbers all around but still ended with the win. Georgia concluded with 47 kills and 52 digs.

Earlier this week, RS/S Holly Carlton reiterated how challenging the schedule was during this fall portion.

Carlton said, “We were anticipating this season and having back to back matches against the same opponents would be an extra challenge. Something really tough that we could learn and grow through this season.”

On the leaderboard, this game is Thayer Hall with 14 kills and T’ara Ceasar at 13 kills. Marlie Monserez triumphed over her opponent’s setter when she recorded 33 assists. Lastly, Elli Mckissock delivered 20 digs.

The Gators move to 5-2 this year and will look for a different outcome today when they face the Georgia Bulldogs again at 5 P.M.

Parker Welch is a Junior at the University of Florida majoring in Sports Media at the College of Journalism & Communications.
@parkerrwelch
Previous College Basketball: Alabama Men’s Basketball Program Put On Three Year Probation
Next Gators Get One Step Closer to New Heights in Win Over Vanderbilt