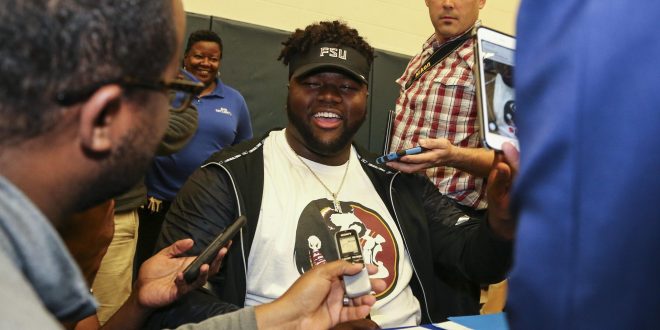 With the early signing period for college football just 15 days away, the 2021 recruiting class continues to change.

A handful of high school players have de-committed from SEC programs across the nation in the past week. And while some players have already committed elsewhere, others are still weighing their options.

Let’s take a look at which teams have been affected by a player’s recent change of heart:

Five-star linebacker Terrence Lewis announced his de-commitment from Tennessee on Monday via Twitter.

The 6-foot-1, 200-pound athlete out of Miami Central High School had committed to the Volunteers back in April. He originally chose the Vols over Florida, LSU, Alabama and Penn State, among other schools.

Despite the news, Tennessee is still in play for ESPN’s No. 10-ranked overall prospect. Lewis claimed “there’s no love lost” between him and the Volunteers, going so far as to say that “they’re still my top school as of now.”

The Pensacola, Florida, native is the 286th-ranked overall prospect on ESPN. And he will have programs such as Ole Miss, Georgia and LSU fighting for his signature in the upcoming weeks.

I wanna thank all of my Tennessee fam for everything. I will be decommiting and opening my choices to see which school is the right one for me!#RespectMyDecision

Auburn received a major blow on Monday when four-star running back Armoni Goodwin announced his de-commitment via Twitter.

Goodwin was committed to the Tigers since 2019. And Auburn stuck with him even after he suffered a major knee injury that cut his junior season short. In 2020, a fully recovered Goodwin rushed for 1,424 yards and 18 touchdowns in 11 games.

ESPN’s No. 100-ranked overall prospect was the first commit of Auburn’s 2021 recruiting class. Now, the Tigers are left with just 12 recruits for next year.

A pair of three-star prospects de-committed from Mississippi State in 48 hours.

Defensive back Myzel Williams announced he was reopening his recruiting process via Twitter on Monday. And running back Amariyon Howard did the same thing on Tuesday.

Williams originally committed to the Bulldogs back in June, picking the SEC school over multiple Group of 5 programs. Howard, on the other hand, committed to Mississippi State last year when Joe Moorhead was still in charge.

With all the recent changes, the Bulldogs currently have 19 commits for their Class of 2021.

FSU misses out on another QB in early signing period

Luke Altmyer’s de-commitment from Florida State on Monday has left the team without a quarterback in its 2021 recruiting class.

The four-star prospect pledged his loyalty to the Seminoles in February thanks to Mike Norvell, who gave Altmyer his first collegiate offer while Norvell was coaching at Memphis. Nevertheless, Altmyer decided to switch on FSU after seeing a lack of progress under Norvell.

Now, the 116th-ranked prospect on ESPN is expected to sign with Ole Miss after visiting the Rebels program over the weekend.