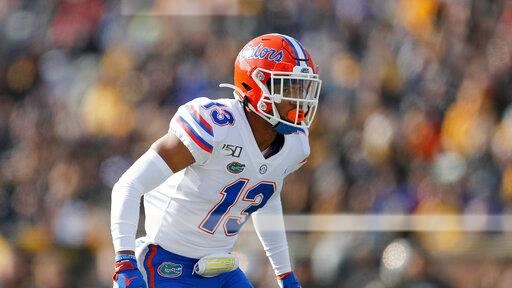 Florida defensive back Donovan Stiner takes up his position during the first half of an NCAA college football game against Missouri Saturday, Nov. 16, 2019, in Columbia, Mo. (AP Photo/Jeff Roberson)

Senior safety Donovan Stiner has been with Florida during its rise back to prominence. He made his debut in 2017. Additionally, the Gators finished 4-7 and fired their head coach. In need of change, 6-foot-2 freshman was confident in the guys beside him. The Gators would eventually be back to winning the East.

As a freshmen, it would be easy to get discouraged when you finish fifth in the East. His first season was disaster, with a team barely able to beat their unranked opponents. It would have been understandable for any player to attempt to change schools. Not this Houston native. He saw the guys beside him. The attitudes and skills of the men suiting up next to him is what kept him here. It’s what fostered immense confidence in the future of his team on their return to prominence.

Now those freshman are seniors. They played a dominant role in getting Gators football back on the map. His instincts were right. The Gators program was reborn. Bringing back the pride of the Swamp. The excitement of wearing a Florida helmet. Donovan, along with his senior teammates, will not be forgotten. Their hard work and dedication to the Mullen era of Gators football will be remembered.

Football fans have their opinions as to who should win this year’s Heisman trophy. Stiner supports Kyle Trask and knows exactly why he deserves it. The touchdowns are there. The passing yards are there. His competition coming from Alabama in Mac Jones. According to the senior safety, its a no brainer.

But, there is one play that sets Trask a part from the rest.

Saturday will be the final time Stiner sports the orange and blue in the Swamp. His parents and older brother will be there to take in the moment. He looks back on his time at Florida. The changes, ups and downs and the moments that defined this team. Going from 4-7 in 2017, to back-to-back bowl wins, now in his senior year beating rival Georgia for the first time in his career.

Senior night is ahead for Stiner. The Gators take on SEC rival LSU in a game that was originally slated for October. It’s the curtain call on his time in the Swamp. The last time he throws on his jersey and laces up his shoes in the Swamp. Kick off is at 7 p.m.