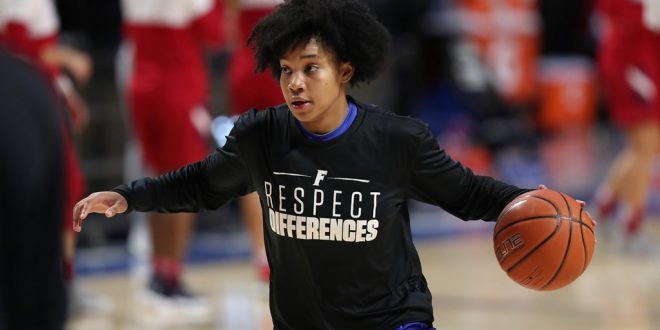 Florida Gators during warm-ups for their matchup against the FAU Owls. Photo by Hannah White.

Florida Women’s Basketball defeated the UNC Asheville Bulldogs 70-48 last night at Kimmel Arena. The matchup closes out a tough portion of the schedule as the team played five games in only a nine day period. With the win against UNC Asheville (1-3), the Gators bring their overall record to (5-1).

The Gators established a new season record yesterday when they grabbed 18 assists. Also, the number on the scoreboard can be credited to 10 players who all contributed points of their own. On the leaderboard, redshirt senior Kiki Smith put 15 points on the board which marks her sixth consecutive game of achieving double digits.  Sophomore Lavender Briggs contributed 20 points of her own and Forward Faith Dut added a career-high of 14 points.

Head Coach Cameron Newbauer has been pushing his team to share the ball and contributes that to the teams’ assist record.

“Just getting the ball going side to side and reversing it. Forcing their guards to play on both sides of the floor, so it was a concerted effort to do that, definitely,” said coach Newbauer. “We shared the ball and had some great possessions today.”

The Gators also held it down on defense and kept things tight at the three-point line where they only allowed 2-of-25 from distance.

“I thought we had some other moments too where we just weren’t quite as aggressive and we had some turnovers. Part of that is playing five games in nine days with still a pretty young squad,” said coach Newbauer.

Florida women’s basketball will have the next 10 days to recover and prepare for their upcoming match-up with the University of Dayton on Sunday, Dec. 20.

Parker Welch is a Junior at the University of Florida majoring in Sports Media at the College of Journalism & Communications.
@parkerrwelch
Previous Stiner has no regrets about being Florida Gator
Next Buckeyes in as Big Ten eliminates six-game minimum for title game