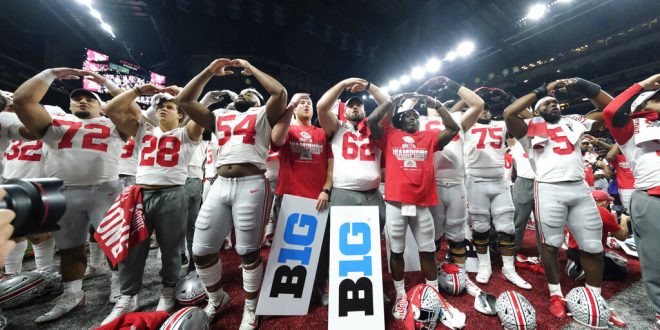 FILE - In this Dec. 8, 2019, file photo, Ohio State players celebrate the team's 34-21 win over Wisconsin in the Big Ten championship NCAA college football game, in Indianapolis. The Big Ten athletic directors support removing the conference’s six-game minimum requirement for teams to be eligible to play for the league championship, and a vote is expected Wednesday, Dec. 9, 2020, to make it official. Removing the minimum would clear the way for No. 3 Ohio State to play in the Big Ten championship game on Dec. 19 against No. 15 Northwestern. (AP Photo/AJ Mast, File)

Administrators decided Wednesday to remove the rule, allowing the Ohio State Buckeyes to advance to the Big Ten Championship. Ohio State is set to face the Northwestern Wildcats on Saturday, Dec. 19.

After a volatile season full of cancelled games, Ohio State only managed to fit five games into its schedule. With a spot in the College Football Playoff at stake, the Buckeyes can maintain their playoff ranking with a win over Northwestern in the conference championship.

Following the cancellation of Ohio State’s game against Michigan this Saturday, Big Ten officials made the decision favoring the Buckeyes. They discussed the reasoning behind their decision, primarily that Ohio State was bound for the conference championship regardless of the outcome against Michigan.

Despite winning every game played, the Buckeyes’ season has been anything but normal.

After starting the season over a month late, Ohio State and other Big Ten teams scrambled to fill their schedules. They hoped to catch up to the pace of other conferences that had started a month earlier.

The season started smoothly for the Buckeyes, who dominated in their first three games. But as the season progressed, Ohio State saw game after game cancelled due to COVID-19 conflicts.

Ohio State ended the season with three of their last five games cancelled, including this Saturday’s scheduled game versus Michigan. At (5-0), they remained one game away from conference championship eligibility. Then, the Big Ten stepped in to help by removing the six-game eligibility rule, saving the Buckeyes’ playoff hopes.

As of now, Ohio State remains in the CFP race. With Alabama, Notre Dame and Clemson highlighting the top three, the Buckeyes are in position to take the last spot. Keep an eye on the ACC and SEC championship games, in which all participating teams are in playoff contention.

Even if Florida can beat Alabama in the SEC Championship, it will be hard to deny Alabama a playoff spot. As long as the Buckeyes win their conference championship and Clemson or Florida loses theirs, they have a solid shot at the CFP.

If Ohio State has to compete with two SEC teams and two ACC teams for a playoff spot, the conference championship title will strongly benefit them. ESPN reporter Heather Dinich explained the use of the conference title as a tiebreaker, if necessary.