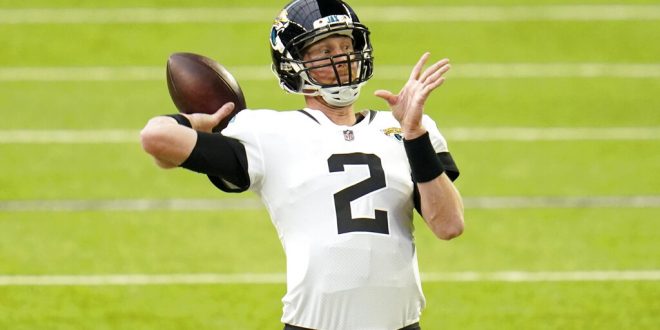 Jacksonville Jaguars quarterback Mike Glennon throws a pass during the first half of an NFL football game against the Minnesota Vikings, Sunday, Dec. 6, 2020, in Minneapolis. (AP Photo/Jim Mone)

The Jacksonville Jaguars began the month by firing Dave Caldwell, the man who helped put together the Jaguars roster for the 2020 season. This roster that has led the Jaguars to (1-11) record thus far in 2020.

The team celebrated the new chapter by losing another game to the middling Minnesota Vikings, the Jags 11th straight loss on the season.

On Sunday, the Jags will look to turn the tide against their AFC South rival in the Tennessee Titans. The two teams squared off earlier this season in Week 2 competition, the Titans squeezing out a win by the score of a field goal, 33-30.

For the Titans, it’s been a different story.

The Derrick Henry-led Titans started off hot out of the gates, winning their first five games. But soon after, they’d falter, losing four out of their last seven.

With both teams coming off losses, they will both have things to focus on heading into Sunday’s game.

Major Keys for the Jags

The Jags will roll out quarterback Mike Glennon for the team’s second battle against the Titans after they started Gardner Minshew against the Titans in their Week 2 contest. Glennon has found some success during his short tenure as signal-caller for the Jags, passing for three touchdowns in his last two games. Sunday will mark his third start in a Jaguars uniform.

But any Jaguars success this season has to also be attributed to sensational rookie running back James Robinson.

Robinson began the week limited in practice but is expected to be a “full go.”

RB James Robinson of the @Jaguars has been unstoppable in his rookie season:
– more rushing yds than Alvin Kamara
– averages more yds/gm than Aaron Jones
– averages more yds/att than Ezekiel Elliott
– has more yards after contact than Kareem Hunt
– has 7th most rec yds by any RB

Coach Doug Marrone knows the Jags will have the hands full with a motivated Titans bunch coming off a loss against the Browns in their last game. He had this to say about his team will matchup with Tennessee on Sunday.

The Jaguars will look to get back in the win on Sunday, instilling some hope back into the season and franchise.

Or — lose. Trevor Lawrence has been looking pretty good recently.