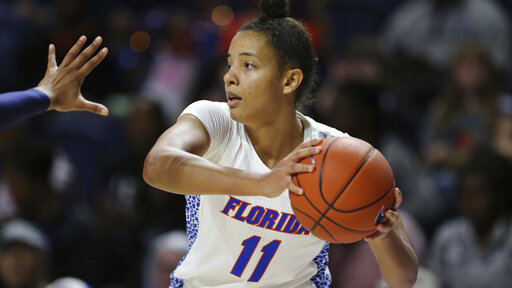 Gators Extend Winning Streak to Six in Victory Over Ospreys

The win is Florida’s sixth in a row going back to Dec. 2.

Big Day for the Gators

It was a dominating performance from start to finish for the Gators (7-1). Florida jumped out to a 20-point lead at the end of the first quarter and never looked back.

As a team, the Gators shot 42% from the court and had a total of five players in double figures by the game’s conclusion.

Furthermore, Monday marked the fourth time this season the Gators have scored 80 points or more in a game.

While Florida was finding success offensively, defensively, the Gators were also steller, as well.

North Florida (2-5) came into Monday’s game averaging close to 73 points per game. But the Ospreys could not match the offensive firepower displayed by Florida.

The Gators limited North Florida to 39% shooting from the floor, including five for 22 from behind the arc. Additionally, Florida had two blocks and seven steals on the defensive side, as well.

Redshirt senior forward Jazz Bond lead the Ospreys in scoring, as she finished eight for 12 from the field with 16 points. She also had a team-high three blocks on the day, as well.

For the Gators, this marks the end of non-conference action. Florida’s next contest will not be for a little over week when they begin conference play against the Vanderbilt Commodores on Dec. 31.

North Florida, however, will have a bit of a longer layoff, as they will not play again until Jan. 2 against Stetson.