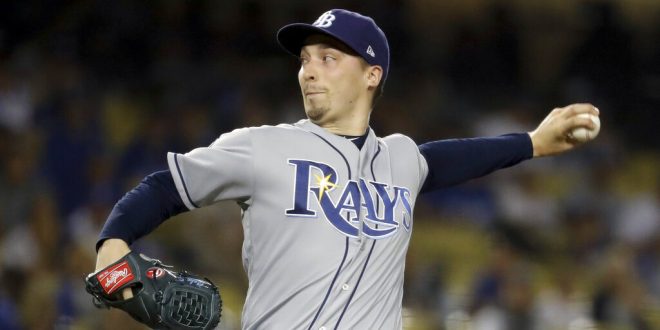 FILE - In this Sept. 17, 2019, file photo, Tampa Bay Rays starting pitcher Blake Snell throws to a Los Angeles Dodgers batter during the first inning of a baseball game in Los Angeles. Rays All-Star pitcher Blake Snell says he will not take the mound this year if his pay is cut further, proclaiming: “I’m not playing unless I get mine.” the 2018 AL Cy Young Award winner said on a Twitch stream Wednesday, May 14 2020. (AP Photo/Chris Carlson, File)

This comes exactly two months to the day after the infamous moment happened. Let it be known; the last moment of Blake Snell as a member of the Tampa Bay Rays was being pulled in Game Six of the World Series.

In the final hours of Sunday, December 27, 2020, the Tampa Bay Rays traded Snell to the San Diego Padres. In return, the Rays got catcher Francisco Mejia, pitchers Luis Patino and Cole Wilcox, and catcher Blake Hunt.

The prospective deal that would send Blake Snell to San Diego would be centered around top pitching prospect Luis Patiño, sources tell ESPN. Also in the deal, as @dennistlin reported, would be catcher Francisco Mejia, pitcher Cole Wilcox and Blake Hunt, a young catcher.

The Rays needed catching depth. This is how they got it.

A Look at Blake Snell

During his five seasons with the Rays, Blake Snell had a record of 42-30, a 3.24 ERA and 648 strikeouts. With the Rays, he won the Cy Young award in 2018–for those who don’t know, this award goes to the best pitcher that year.

While there had been rumors brewing for weeks, this move still comes as a surprise, even to those who cover the Rays closely.

A lot of people on the roster/organization expected the #Rays to make a few surprising moves, but disbelief is still the initial reaction of everyone I’ve talked to over the last 20 minutes.

Snell would have been the Opening Day starter on April 1 had he not been traded. With Charlie Morton also gone, that honor now likely goes to Tyler Glasnow. Snell will join an up-and-coming Padres team and adds another strong arm to a rotation that already has Chris Paddack and Mike Clevinger (and signing Trevor Bauer is still a possibility).

What comes as a surprise from this trade is how many years of control Snell still has. He remains under contract until after 2023. Perhaps, the team is strapped for cash due to the COVID-19 pandemic. No fans were allowed to attend this year, costing the Rays ticket and concessions revenue. They lost even more revenue opportunities when the World Series–which allowed fans–was held at a neutral site due to the pandemic.

Maybe, it’s the quarreling behind the scenes. Snell has been publicly critical of the Rays front office in 2020, dating back to the trade of Tommy Pham. There were also his comments during the labor strife before the season. The whole being-pulled-in-the-World Series thing does not help either.

Francisco Mejia should be on the Rays’ active roster immediately. He has major-league experience with the Padres. In 128 career games, Mejia has a slash line of .225/.282./.386 along with 12 home runs and 33 RBIs.

Pitcher Cole Wilcox was drafted by the Padres back in July. He has not played a professional game yet. In four starts with the Georgia Bulldogs in 2020, Wilcox went 3-0 with a 1.57 ERA, a strikeout to walk ratio of 32 to 2 in 23 innings. We’ll see how he translates to pro ball.

Blake Hunt adds catching depth to the Rays farm system. He has not played above Class A, so you won’t be seeing him anytime soon. He has a .258 average in the minors, and his defense seems promising.

Harrison is a sports coordinator at ESPN 98.1 FM/850 AM WRUF. He served as a beat writer for Florida Gators football for the 2019 and 2020 seasons. He also contributes to WRUF's Gainesville Sports Center segments and makes appearances on the Clash on Harp on Sports. Harrison has been a content writer for WRUF since January 2019 as well.
@HarrisonSmaj
Previous Buccaneers Make Playoffs, FitzMagic Leads Dolphins, Jaguars Get Top Pick
Next Gators Set for First Ever Cotton Bowl