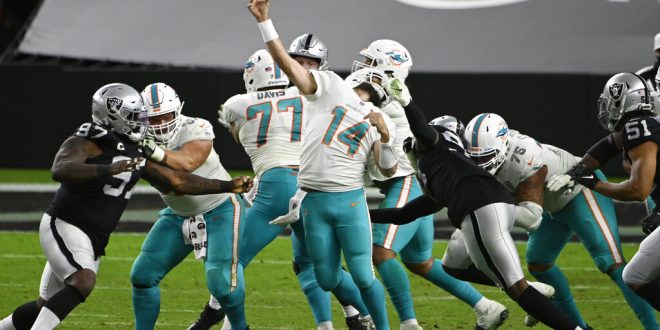 It was an eventful weekend around the National Football League for Florida teams.

The Tampa Bay Buccaneers locked in a playoff spot for the first time in over a decade; the Miami Dolphins now have a chance to control their playoff destiny and with another loss for the Jacksonville Jaguars, they have locked in the number one pick in the 2021 NFL Draft.

For the first time since 2007, the Tampa Bay Buccaneers are headed to the NFL playoffs. The 47-7 victory over the Detroit Lions on Saturday ended a 13-year drought for the Buccaneers.

However, for Tom Brady it’s nothing new. The former New England quarterback led the Patriots to 11 consecutive playoff appearances and 17 overall. In his first season with the Buccaneers, it appears the Brady Effect might be real.

For the first time since 2007, the Tampa Bay Buccaneers are headed to the playoffs. The Buccaneers had the longest playoff drought among NFC teams.

Brady threw for four touchdowns and almost 350 yards before being pulled from the game at halftime. The Buccaneers put in second-string quarterback Blaine Gabbert who added another two touchdowns in the third quarter.

On Tampa Bay’s opening drive, they jumped out to an early 7-0 lead. The rest of the half was all in favor of Brady and the Buccaneers. Brady threw for three more touchdowns while running back Leonard Fournette tacked on a rushing touchdown. Tampa Bay led the struggling Lions 35-0 at the half.

With Gabbert in the game for the second half, the Buccaneers remained in control. Rob Gronkowski and Mike Evans each snagged a touchdown for Tampa Bay. The Lions’ offense couldn’t manage to put up a single point on the board. Detroit’s lone touchdown came from a punt return by Jamal Agnew.

Despite the win, Brady says there is still more work to be done.

The Buccaneers welcome the Atlanta Falcons to Tampa Bay on Sunday for a 1:00 p.m. kickoff.

If you don’t believe in FitzMagic it might be the time to give it another chance. Quarterback Ryan Fitzpatrick led the Dolphins to a 26-25 comeback victory over the Las Vegas Raiders late in the fourth quarter on Saturday.

Rookie Tua Tagovailoa got the start for the Dolphins. However, the Raiders jumped out to an early lead with a one-yard touchdown run from quarterback Derek Carr. From there the Raiders would hold the lead throughout the game.

The fourth quarter was neck and neck. Miami tied things up at the start of the quarter with a field goal but the Raiders responded with a touchdown to retake the lead. However, Fitzpatrick and the Dolphins scored a touchdown of their own to take a 23-22 lead.

With 22 seconds remaining, the Raiders took the lead 25-23 with a 22-yard field goal from Daniel Carlson.

In a last ditch effort, Fitzpatrick and the Dolphins took a shot down field. With his face mask being pulled, Fitzpatrick launched the ball down the field to Mack Hollins for 31 yards. A roughing the passer penalty moved the Dolphins within field goal range. A 44-yard field goal from Jason Sanders gave the Dolphins a 26-25 lead and the win.

With a serious chance to compete for a playoff spot, it’s a must win for the Dolphins. Coach Flores stated Tagovailoa will get the start in Miami’s meeting with AFC East opponent, the Buffalo Bills, on January 3.

The Jacksonville Jaguars had a rough season but secured the top pick in the 2021 NFL Draft. after a 41-17 loss to the Chicago Bears on Sunday, the team’s 14th straight loss.

The Jacksonville Jaguars have CLINCHED the FIRST PICK overall. pic.twitter.com/UbXxw8gmer

Quarterback Mike Glennon got the start over Gardner Minshew and rookie Jake Luton. However, it wasn’t enough to compete against the Bears. Glennon threw for two touchdowns and two interceptions in the Jaguars’ loss.

The Jaguars take a trip to Indianapolis for a second battle with the Colts to wrap up the season.

Previous Keyontae Johnson Out of Hospital
Next Blake Snell Traded