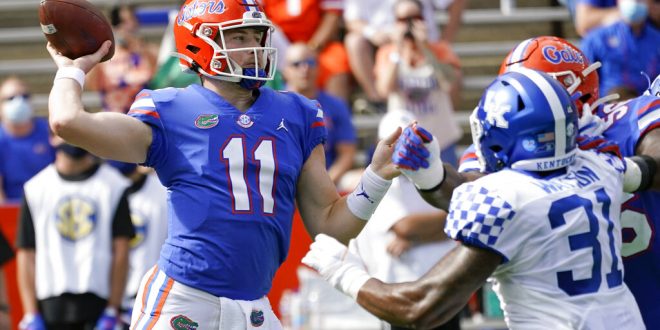 A year of all-conference play has come to a close. There’s no playoff or conference championship, but there is still a first for the seventh-ranked Florida Gators.

It’s their first-ever appearance in the Cotton Bowl Classic, and they face the sixth-ranked Oklahoma Sooners on Dec. 30 at 8 p.m.

This will be the second time ever as well that Florida will play Oklahoma. The first time these two played each other, they faced off in the 2009 BCS National Championship. Florida; led by quarterback Tim Tebow, Head Coach Urban Meyer and offensive coordinator Dan Mullen; beat Oklahoma 24-14 to win their third national title.

Almost 12 years later, and in what might Kyle Trask‘s last game as a Gator, the rematch has arrived.

Adding Another New Year’s Six Bowl to the Gators’ Collection

That, along with a top-10 finish, is the ceiling for the Gators at this point. Back-to-back losses ended playoff and national championship hopes very quickly. The fact that they moved up in the AP and Coaches Polls and stayed put in the CFP after losing to Alabama shows that Florida might have been playoff bound if they pulled off the win.

That did not happen, of course, but their effort against the Crimson Tide was rewarded.

Since Dan Mullen became the head coach in 2018, the Gators have won 10-plus games twice and took home two New Years Six Bowls—one Peach, one Orange.

Now, they can take home a Cotton Bowl. If the Gators win, it will be their fourth-different major bowl in school history. They still need to earn it.

Both teams appear to be relatively even on offense. But there are some key differences.

Florida indisputably has the advantage at quarterback. Heisman candidate Kyle Trask leads all of FBS in passing touchdowns (43) and passing yards (4,125). Trask is the only QB in the nation with at least 40 touchdowns and at least 4,000 passing yards. Trask enters the game without his go-to receiver, tight end Kyle Pitts, and wide receivers Trevon Grimes and Kadrius Toney–all three are sitting out the game and preparing for the NFL Draft. On top of this, wide receiver Jacob Copeland will sit out due to testing positive for COVID-19.

However, Trask still has options in his arsenal. The Gators were effective in spreading the ball around in the passing game this season, so Trask is not necessarily reliant on key receivers. Receivers such as Justin Shorter and Kemore Gamble will likely be Trask’s top targets. Running back Malik Davis is also a possible target for Trask, as he has over 300 receiving yards this year.

Oklahoma does have a top-1o quarterback in Spencer Rattler. However, their offensive approach can be described as a little more balanced. The Sooners utilize the running game a little more than Florida does. Their running game by committee scored 24 touchdowns and collected 1,542 rushing yards. The scoring is spread out much more evenly, as Rattler only has 27 touchdown passes.

With two evenly-matched offenses, Florida offensive coordinator Brian Johnson said it comes down to not wasting any plays and getting the right players to those plays.

The Issue in the Back of Everyone’s Mind: Defense

There is no way around it. This game could come down to which defense has the better night.

Oklahoma has the second-best rush defense in the country, only allowing on average 90.6 yards per game on the ground. Meanwhile, Florida has the fourth-worst, allowing 146.5 yards per game.

Florida is seventh in the nation in sacks with 33.0, while Oklahoma is third at 38.0. The number of sack yards is about even for both teams, but Oklahoma did it in one less game.

The Keys to a Gators Victory

There is likely not going to be a Lamical Perine-type performance like there was in the Orange Bowl, so forget the running game. Victory comes from the air for the Gators. But that is just stating the obvious, folks.

Florida should keep this in mind too. They allowed the third-most sacks this year, while Oklahoma’s defense is second in sacks. The o-line will need to do everything they can to keep the pocket intact so Trask can get the job done.

Also, Florida, especially on defense, needs to play a clean game. Penalties cost Florida a win over LSU and in the SEC Championship game against Alabama. Stay disciplined and stops on third down will be key in getting the win.

However, they need to take full advantage of Oklahoma’s lack of discipline—they committed 69 penalties for a loss of 698 yards.

You can catch the telecast on ESPN, and exclusive radio coverage on ESPN 98.1 FM/850 AM WRUF.

Harrison is a sports coordinator at ESPN 98.1 FM/850 AM WRUF. He served as a beat writer for Florida Gators football for the 2019 and 2020 seasons. He also contributes to WRUF's Gainesville Sports Center segments and makes appearances on the Clash on Harp on Sports. Harrison has been a content writer for WRUF since January 2019 as well.
@HarrisonSmaj
Previous Blake Snell Traded
Next Pat Dooley’s Back Nine: December 28