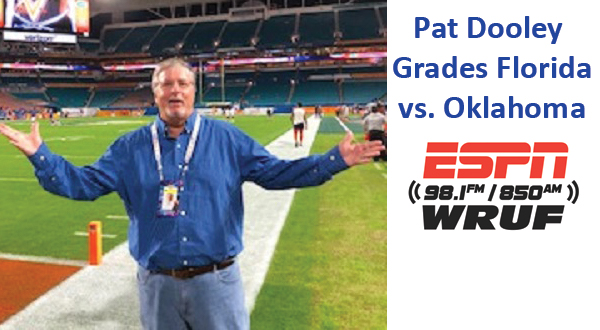 Pat Dooley of The Tailgate (weekdays 4-6 p.m. with Jeff Cardozo and back on the air on Monday) brings his legendary grading of the Gators to WRUF.com for the last time this football season (he’ll be back for the spring game). This week, Florida vs. Oklahoma in UF’s first-ever appearance in the Cotton Bowl.

OFFENSE F-
It’s difficult to be critical of a Heisman finalist when you don’t know whether or not new receivers ran bad routes. But three picks in the first 11 minutes eliminated any angst Gator fans have about Tuesday night (and the Heisman). It’s not fair that Trask had to play the last game of this season without his top four receivers, but this season has not been fair.

It didn’t help that Florida had a chance to cut the lead to 24-20 and got drops from Rick Wells and Keon Zipperer.

It was a sad way for one of the great stories in the history of college football to go out, watching someone else run the show in a blowout loss.
But that is not the way most of us will remember Kyle Trask’s two seasons and certainly not the COVID-2020 season.

DEFENSE F—
I’m done grading these guys. This is a defense that is not only an embarrassment to the school but to the conference. Guys were out but the sixth game this season with 30-plus points? And a school record for first downs allowed in a season? And points allowed in a season. Come on.

Florida allowed more than 684 yards – the most in UF history — and more than 400 rushing yards. Think about that. And think about the Gators giving up 55 points.

SPECIAL TEAMS C
Florida did a good job on Oklahoma’s first couple of kickoff returns but then gave up a 40-yarder. It was a little surprising to see Evan McPherson come up that short on a 58-yard field goal try although it’s not like we’re going to rip the guy.

COACHING F–
Running Trask twice inside the 10 down 17? OK, Dan Mullen, you’re the boss. The guy has been a genius calling plays this season, but the second run on third down was a bad call and almost felt like a surrender that he didn’t want to get shut out.

Still, they got back in the game, but a bad defense went sour again and the Gators were basically done at halftime.

It’s very difficult (still) to understand how a defense can appear to be so unorganized. Even with so many guys out.

No coaches had a good game, let’s make that clear. They seemed to coach as if they knew what was coming. Oklahoma is good, but not great. Certainly not that great.

OVERALL F—–
It was sad to see this season end this way, with one of the biggest blowout losses ever. It was either reminiscent of the Sugar Bowl after the ’91 season when guys we didn’t know were on the team were playing or the national title game against Nebraska. Either way, it was embarrassing. This is definitely a step back for the program.

In the end, Florida did make another New Year’s Six Bowl and was really close to having a special team. Instead, this was an 8-4 team with a brutal loss to close the season, which is never good.