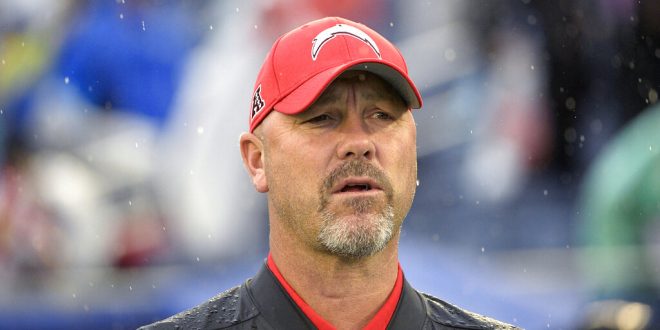 FILE - AFC defensive coordinator Gus Bradley, of the Los Angeles Chargers, watches during the first half of the NFL Pro Bowl football game against the NFC, in Orlando, Fla., in this Sunday, Jan. 27, 2019, file photo. The Las Vegas Raiders have hired Gus Bradley as their new defensive coordinator with the task of turning around one of the league's worst units. Coach Jon Gruden decided to bring on the experienced Bradley on Tuesday, Jan. 12, 2021, to fill that role Paul Guenther had for the first two-plus seasons on his staff before being fired in December. (AP Photo/Phelan M. Ebenhack, File)

Gus Bradley got his start under John Gruden in 2006 as the Tampa Bay Buc’s quality control coach in 2006. Now 14 years later, the pair is back together as head coach and defensive coordinator. Bradley joined the Raiders on Tuesday as the new Defensive Coordinator.

“I appreciate the opportunity to be a Raider now and I’m excited about the future and what it will bring,” the new Raiders coach said.

Bradley worked his way up since landing his first NFL job under Gruden in the early 200s. Coming from North Dakota State, the defensive guru worked his way up to linebackers coach. Then defensive coordinator for the Seattle Seahawks, coaching a unit that went on to be known as the now legendary “Legion of Boom” with the help of Head Coach Pete Carroll. Bradley left Seattle in 2013 to take his first head coaching position with the Jacksonville Jaguars.

In his four years with the Jaguars, the first time head coach managed a 14-48 record. Though not ideal, his defensive schemes and play style was still a hot commodity in the league. After being fired by the Jags in 2016. Bradley joined the Los Angeles Chargers in 2017.

Even with the struggles that plagued the Jags and Bradley in those four years, his time as a head coach has shaped his journey. Perhaps it even made him a better coach because of it.

“When you are a head coach you are involved in many of the offensive meetings, you are sitting in with the offensive personnel and staff,” he said. ” You are hearing how they gameplan and how they do it by formation and what formations they think will best attack this style of defense. I think in many ways it was beneficial and it gave me a different view on how offenses are attacking us.”

Bradley has not faltered or wavered from his strong and faithful defensive beginnings. He has coached the big names like Kam Chancellor, Richard Sherman, Earl Thomas, K.J. Wright, and Bobby Wagner who had success in Seattle and also created consistency with the Chargers over the last four years. These factors make his scheme and coaching an extremely appealing addition to many NFL teams.

Bradley says his foundation of defensive style has stayed the same. But he has adapted to changes in the games by adding new elements to his arsenal to keep it fresh and relevant.

” I think the basis is cover three, but I think it has evolved since Seattle days; when we went to Jacksonville there were things we incorporated and with the Chargers too.,” he said. “I think it is more multiple since the Seattle days, but it really revolves around looking at the personnel that we have and putting guys in a position where they can make a lot of plays.”

Some key Raiders’ personnel who will look to flow right into Bradley’s system include linebacker Cory Littleton, corner Lamarcus Joyner, defensive ends Clenin Ferrell, Carl Nassib, and Maxx Crosby as well as linebacker Nick Kwiatkoski.  Bradley has inherited a young unit that has not been the focus of the organization spending wise in many years.

Looking at the stats, the Chargers came in at No.10 in total defense in 2020. They ranking ninth against the pass and 18th against the run under Bradley. On the other hand, the Raiders were 30th out of 32 teams in points allowed in 2020.

Linebackers and Interim Head Coach Rod Marinelli has been retained by Bradley and will remain with the organization. It is still unclear what other staff might be retained or if any Chargers staff will be joining the staff as well at this time.