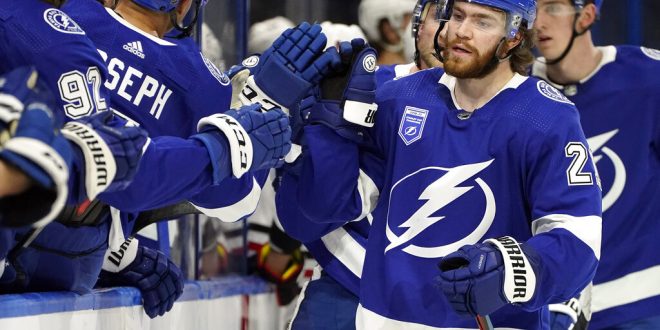 Tampa Bay Lightning center Brayden Point (21) celebrates with the bench after his goal against the Chicago Blackhawks during the third period of an NHL hockey game Wednesday, Jan. 13, 2021, in Tampa, Fla. (AP Photo/Chris O'Meara)

After securing their first Stanley Cup in over 16 years in 2020, the Tampa Bay Lightning are off and running to start the 2021 NHL season. The Lightning (1-0-0) defeated the Chicago Blackhawks by a final score of 5-1 on Wednesday night.

Fast Start for the Bolts

It didn’t take long for Tampa Bay to crack the scoreboard. With a little under 10 minutes remaining in the first period, left winger Ondrej Palat was able to capitalize on a Lightning power play to put Tampa Bay up 1-0 early on.

Roughly six minutes later, Tampa Bay once again found the back of the net after right winger Mathieu Joseph’s follow-up make to put the score at 2-0.

Not even a little over a minute later, center Anthony Cirelli tallied up another goal for the Lightning to increase their lead to three in the final minutes of the first period. Left winger Alex Killorn assisted on two of Tampa Bay’s three goals in the opening period.

Center Steven Stamkos, who was the team’s second-leading scorer last season, accounted for the Lightning’s only goal in the second period. Stamkos’ score came with a little over 10 minutes remaining to increase Tampa Bay’s lead to 4-0.

By the second intermission, the Lightning had 26 shots on goal, while the Blackhawks (0-1-0) had 16.

After an already strong showing, the Lightning were able to tack on one more goal in the third period. Center Brayden Point was able to capitalize on a power play and push Tampa Bay’s lead to 5-0 with a little over 13 minutes remaining.

Chicago finally found itself on the board after center Dylan Strome scored with a little over four minutes left to cut to the lead to 5-1. However, it was too little too late for the Blackhawks, as the Lightning’s advantage was far to overcome.

The two squads are set to face off again on Friday at 7 p.m.