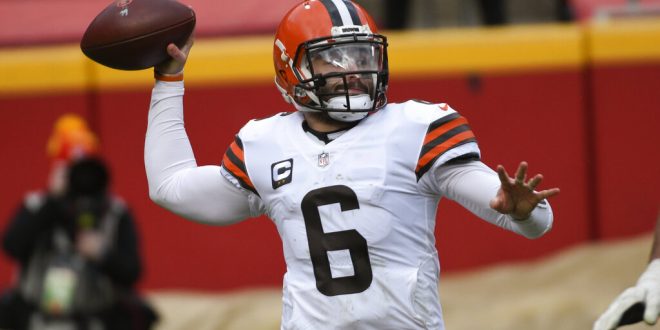 Cleveland Browns quarterback Baker Mayfield throws a pass during the first half of an NFL divisional round football game against the Kansas City Chiefs, Sunday, Jan. 17, 2021, in Kansas City. (AP Photo/Reed Hoffmann)

Sunday wrote an end to a pair of AFC North teams’ hopeful postseason runs. The Baltimore Ravens and Cleveland Browns fell short to the conference’s top two seeds this weekend. Despite what many would consider a successful season for both, neither walked away satisfied.

With under five minutes remaining in regulation, the Browns stellar, eighth ranked offense held possession down by just five. However, quarterback Baker Mayfield failed to mount a second-consecutive touchdown drive, punting away the Browns last chance.

Chiefs star signal caller Patrick Mahomes left the game early to be a evaluated for a concussion. Michigan great Chad Henne replaced Mahomes, assuming his first career playoff snaps. Despite giving Cleveland life with a poorly thrown end zone interception, the 37-year-old did just enough to escape with the victory. Henne’s five yard completion to wide out Tyreek Hill on fourth and one officially wrote a finish to the Browns 12-win season.

For Baker Mayfield, it’s a disappointing end to a season in which so much effort was put in for success.

Head Coach Kevin Stefanski, who many believe should be crowned this season’s Coach of the Year, had similarly disheartened closing thoughts.

The Ravens season came to an end late Saturday night after falling to Buffalo 17-3. Before the defeat, the Ravens had won six straight, averaging a stunning 34.3 points per game.

Led by reigning MVP quarterback Lamar Jackson, Baltimore’s run-heavy offense simply couldn’t be stopped. On Saturday, however, Jackson suffered a concussion, forcing him to leave late in the third quarter. The injury, coupled with a 101-yard pick six thrown by Jackson earlier, put an end to the Ravens high hopes for this season.

Time to Look Forward in Cleveland

Now these two must look ahead. Luckily, there is plenty for both to look forward to. Heading into the 2021 season, the Ravens are projected to have the 10th-most salary cap space in the League. The Browns project to rank 12th.

First on the agenda, will be to make decisions on impeding free agents on the roster. The Browns resigned wide receiver Rashard Higgins to a one-year prove-it deal last offseason. It’s safe to say Higgins well outplayed his $890,000 salary, hauling in 37 catches for 599 yards and four touchdowns this season. Stefanski spoke highly of Higgins following the game Sunday.

Higgins isn’t the only impending free agent the Browns will examine this offseason. Headlined by star pass-rusher Olivier Vernon, the Browns currently have 18 players set to be unrestricted free agents in a month.

Vernon ranked 14th in sacks this season with nine. The 31-year-old was traded from the Giants in 2019 after signing a mega five-year, $85 million deal with New York. Vernon missed Sunday’s loss after injuring his Achilles the week prior. With a potential $20 million in cap space, deciding to retain Vernon will be a top priority for the Browns.

Time to Look Forward in Baltimore

The Ravens also have free agent pass-rushers to worry about. 29-year-old Matt Judon and 26-year-old, Baltimore native Yannick Ngokoue will both be unrestricted free agents come March. The two costed Baltimore a combined $28 million against the cap in 2020.

Baltimore franchise tagged Judon last offseason, however they’ll look to get a long-term deal done with two-time Pro Bowler in the coming months.

The Ravens acquired Ngakoue via trade from Minnesota midway through the season. Ngakoue totaled three sacks in eleven games for Baltimore.

The Ravens will also be reportedly be losing running back Mark Ingram to free agency. While the Ravens will miss Ingram’s production rookie running back J.K. Dobbins has a bright future as Baltimore’s feature back. Dobbins’ 890 rushing yards this season is second on the team behind Jackson. The Jackson-Dobbins duo is one that will fear opposing defenses for years to come.

Baltimore is releasing veteran RB Mark Ingram on Tuesday, per league sources. The move will save the Ravens $5 million against the 2021 cap and allow Ingram to get an early jump on free agency.

Ingram is healthy and believes he has plenty to offer for 2021.

The new league year, along with the beginning of free agency, begins March 17.

Furthermore, the 2021 NFL Draft begins Thursday, April 29 and will take place in Cleveland.

The Browns will select 26th overall and own seven draft picks in all. On the other hand, the Ravens have the 27th pick in the 2021 NFL Draft and a total five picks.

Will Levenson is a Journalism and Sports Media major at UF. He produces daily shows for WRUF, including "Sport Scene with Steve Russell," "Harp on Sports," and "The Tailgate." In addition, Will provides weekly sports updates for WUFT News and radio Sportscenters for WRUF radio. Will has been a writer at ESPN Gainesville since September 2019.
@BigWillLevenson
Previous Tennessee Parts Ways With Jeremy Pruitt Following Internal Investigation
Next Saints Offseason Decisions