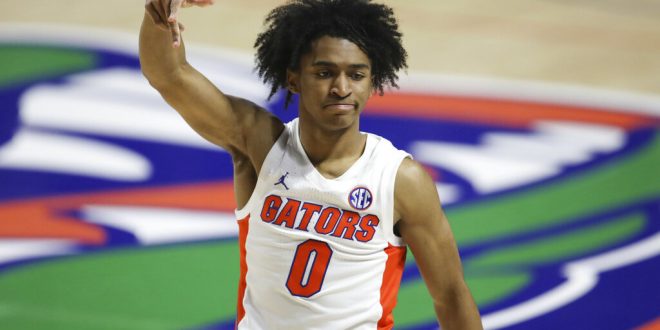 Florida guard Ques Glover celebrates after making a 3-pointer against Tennessee during the second half of an NCAA college basketball game Tuesday, Jan. 19. 2021, in Gainesville, Fla. (AP Photo/Matt Stamey)

To say the Gators’ performance in the SEC this season has been a rollercoaster would be an understatement.

They started the conference slate with statement wins against Vanderbilt and LSU and then followed that up with double-digit losses to Alabama and Kentucky. Most recently on the adventure, Mike White’s squad lost to unranked Mississippi State and proceeded to beat No. 6 Tennessee by 26 points without two of their key starters.

So now, as they travel to take on the Georgia Bulldogs (9-4) in Athens, they’ll look to do something they haven’t done all season: keep the momentum going. The two rivals will face off on EPSN 2 at 2 p.m. Saturday at Stegeman Coliseum.

One of the reasons the Florida-Tennessee was supposed to be so lopsided (it was, just not the way most expected!) is because the Gators were missing Scottie Lewis and Colin Castleton. Mike White said on Friday that Castleton will be a game-time decision, and Lewis is still going through COVID-19 protocols. This leaves open the possibility that both will be absent against Georgia.

So, what exactly are the Gators missing in the two dynamic players? For one, Castleton and Lewis are the team’s third- and fourth-leading scorers, respectively. And that doesn’t even begin to explain the edge these two players give to the Gators’ attack.

Castleton’s ability to outmuscle defenders inside the paint has been a key finding for Mike White this season. And with Scottie Lewis, endless energy and quickness abound. If both players miss Saturday’s game, it should be clear whether the Gators’ dominant win against Tennessee was a fluke or the turning of a new leaf for Florida’s season. Because Tom Crean’s Bulldogs are on a hot streak of their own.

The Bulldogs come into Saturday’s game on the heels of their first two SEC victories of the season. They first got into the win column with a last-minute victory over Ole Miss and more recently a buzzer-beater shocker over Kentucky.

Led by Sahvir Wheeler and rising star J.D. Johnson, the Bulldogs boast a balanced attack, with seven players averaging over 9.5 points per game. Johnson was just granted eligibility to play on Jan. 11 before the Bulldogs game against Auburn after sitting out the first 10 games of the season due to a certification eligibility issue.

Georgia ranks 3rd in the SEC averaging 39.9 rebounds per game, but you wouldn’t think that by looking at their roster. 6-foot-8 Toumani Camara usually lines up at center and 6-foot-6 Andrew Garcia plays at power forward. This gives them speed to be efficient in transition and the rebounding ability to make second-chance shots.

Who Can Fill In?

If Castleton and Lewis miss again on Saturday, look for Omar Payne and Tyree Appleby to make significant contributions again. Payne had a breakthrough against the Vols on Tuesday, logging 27 minutes, nine points, nine rebounds and five blocks. Coach White said he was impressed by what he saw from Omar.

But, all eyes are on the status of Castleton and Lewis heading into Saturday’s game and whether or not the Gators can finally build on a big win.

I'm a third-year student at the University of Florida passionate about storytelling and sportswriting. My goal is to work in communications for a professional sports team after I graduate.
Previous Connor McGregor, Dustin Poirier set for UFC 257
Next Hank Aaron Passes Away at 86