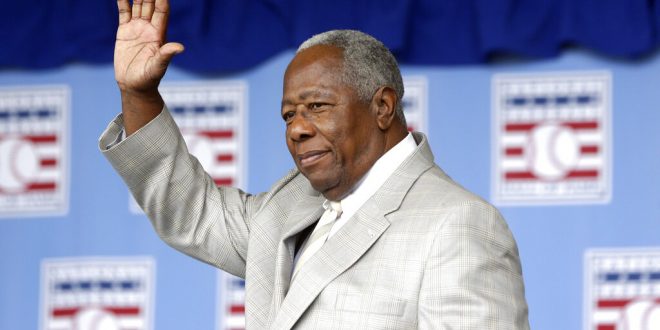 FILE - Hall of Famer Hank Aaron waves to the crowd during Baseball Hall of Fame induction ceremonies in Cooperstown, N.Y., in this Sunday, July 28, 2013, file photo. Hank Aaron, who endured racist threats with stoic dignity during his pursuit of Babe Ruth but went on to break the career home run record in the pre-steroids era, died early Friday, Jan. 22, 2021. He was 86. The Atlanta Braves said Aaron died peacefully in his sleep. No cause of death was given. (AP Photo/Mike Groll, File)

To some, he is still the home run king. But to all, Hank Aaron will forever remain a legend.

Aaron passed away this morning at the age of 86. His passing led to a wave of appreciation for his contributions to the game and the world.

Hank Aaron’s impact reached far beyond the diamond.⁰⁰A true trailblazer on and off the field. pic.twitter.com/e3TO4CpJd9

Without Hank Aaron there wouldn't be people like me. pic.twitter.com/nlIhMax2tV

Hank Aaron is a member of the National Baseball Hall of Fame, and will forever be remembered as the man who broke Babe Ruth’s career home run record.

As Aaron rounded second, two men, both white, jumped on to the field and ran with Aaron as he reached third base. He was met by his teammates, family and the press as he reached home plate. He was relieved the journey was over, but no one could take this achievement away from him–even his record of 755 home runs was surpassed by Barry Bonds in 2007.

But, like was stated before, some still he Hank Aaron as the true king.

His total RBIs are also still a record, and he holds the other following records:

Harrison is a sports coordinator at ESPN 98.1 FM/850 AM WRUF. He served as a beat writer for Florida Gators football for the 2019 and 2020 seasons. He also contributes to WRUF's Gainesville Sports Center segments and makes appearances on the Clash on Harp on Sports. Harrison has been a content writer for WRUF since January 2019 as well.
@HarrisonSmaj
Previous Gators Basketball Looks to Continue Momentum in Athens
Next Only One Spot Left on the NFL Head Coaching Roster