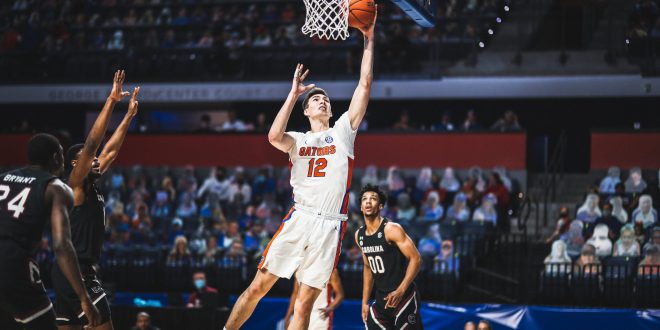 Scenes from No. 22 Florida's 72-66 loss to South Carolina... Photo by: Courtney Culbreath

No. 22 Gators Take a Step Back with Loss to Gamecocks

It appeared to be the same old story, different year as the No. 22 Florida Gators fell to the South Carolina Gamecocks 72-66.

South Carolina seems to always give the Gators a run for their money no matter how good the Gators seem to be that year. The Gamecocks have now won four of the last six meetings between these two teams

The Gamecocks dominated in the paint, outscoring Florida 50-30. South Carolina also outrebounded Florida 43-35, which allowed them 20 second-chance points. The Gators missed their last eight shots ( nine of the last 10), scoring just one point in the final six-plus minutes.

AJ Lawson led the way for the Gamecocks with 22 points and eight rebounds. Seventh Woods was South Carolina’s next leading scorer with 12 points, four rebounds and two steals.

Tre Mann was Florida’s leading scorer and rebounder with 17 and eight respectively. Noah Locke had a hot first half but cooled down in the second. He still finished with 15 points and two assists.

Colin Castleton’s defensive prowess did continue in this game for Florida though as he recorded seven blocks.

Early in the game, the Gators seemed a bit off defensively, giving South Carolina an early 15-7 lead. The Gamecocks’ offense wasn’t missing either. In the first six minutes of the game, South Carolina went 8-0 on second-chance points. It also didn’t help matters that Scottie Lewis got into early foul trouble and headed to the bench with 13 minutes still left in the half.

South Carolina then got two shots and the ball back, making it 24-14, after a flagrant was called on Omar Payne. Turnovers seemed to plague the Gators, as they racked up five before the halfway point of the first half. AJ Lawson added nine points for the Gamecocks in just seven minutes of play.

Tre Mann brought the Gators back within four after a three-pointer. The Gators seemed to find some of their offensive rhythm after that and went on an 11-2 run. Meanwhile, South Carolina missed seven of its last eight shots. Soon, the Gators had erased what was a 10-point deficit and tied the game up at 29.

Both teams finished out the half strong, but the Gators went into the locker room with the 40-35 lead.  Even after falling behind, the Gators shot 48% for the half to the Gamecocks’ 39%.

The Gators came out of halftime hot on offense, but the Gamecocks used their downtime wisely too, and were soon within one. A big block from Colin Castleton, a three from Tyree Appleby and a dunk from Payne put the Gators back up 51-45.

South Carolina went on a 10-point run though and regained the lead 57-55 with just under 10 minutes to play. A few minutes later though, another Castleton block turned into a dunk from Payne and put Florida back up by six.

Some shaky plays on both sides of the ball for the Gators allowed the Gamecocks to tie the game back up at 65 with four minutes to play. And soon after, the Gamecocks retook the lead 67-65.

Down to under a minute and the Gators found themselves playing the foul game and down by five.

The Gators fall to 10-5 and 6-4 in league play and will head on the road to take on LSU in Baton Rouge this weekend. The Tigers currently sit at 11-5 but have lost four of their last five. Tipoff is set for 2 p.m. and coverage will be on ESPN.