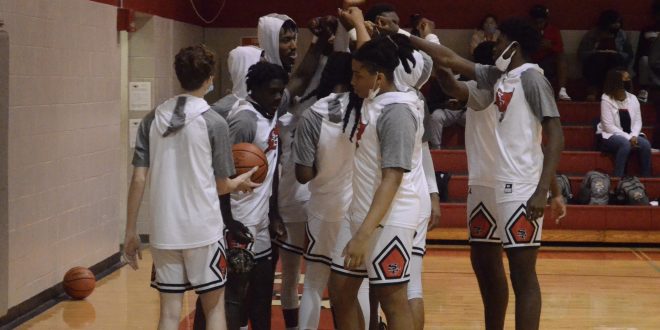 Story by: Chris Will and Victoria Siwek

Fight to the End

The Santa Fe boys basketball team (13-4) came into Tuesday night’s matchup with Buchholz (6-9) on a seven-game win streak and an undefeated record at home (6-0). The Raiders extended that streak, squeezing past the Bobcats by a score of 51-47. Senior Ernest Ross led the way for the Raiders racking up 21 points and 15 rebounds (nine offensive rebounds).

The Raiders got off to a hot start, opening the game on a 10-0 run that was electrified by an alley-oop pass from sophomore point guard Dontrell Jenkins that was thrown down by Ross. Buchholtz was forced to call an early timeout but failed to slow down Santa Fe as they pushed to a 22-6 lead at the end of the first quarter.

Ross and the Raiders continued their dominance, going into the half with a 13 point lead.

Santa Fe had dominated in the paint on the defensive end, finishing with six blocks and nine steals, but Buchholz adjusted their game. The Bobcat guards began driving into the lane and dishing it out to the shooters on the outside who were knocking down the three-point shot with ease, finishing 8-for-18 from beyond the arc.

This strategy, along with stops on the defensive end, cut the Raider lead to just four points with 1:35 left. However, Buchholz was unable to get any more stops and exchanged buckets with Santa Fe until the time ran out.

Despite Santa Fe never trailing the contest, the game came down to the end, and the Raiders walked away with a 51-47 victory.

When asked about the early jump to a 10-0 lead, Santa Fe assistant coach Thaddis Merricks said, “That’s the style of basketball we want to play.” However, Merrick acknowledged that his team needs to “be able to execute and punish them and finish off the game.”

Merrick said Santa Fe has been without head coach Elliot Harris for the past few days but they’re “working through it.”

Chris Will is a second-year journalism student with a focus on sports and media. Originally from the Fort Lauderdale area, Will now covers all things sports in Gainesville.
@_Chris_Will_
Previous Buchholz Girls Soccer Advances to District Semifinals
Next Alabama, Missouri Highlight SEC Action Tonight