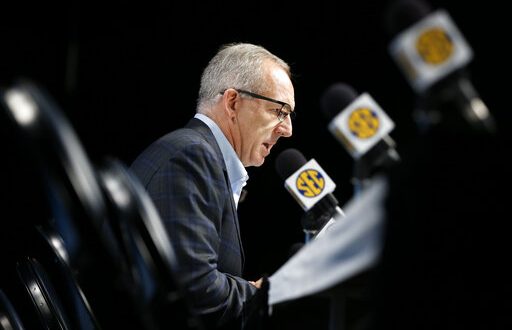 FILE - In this March 12, 2020, file photo, Greg Sankey, commissioner of the Southeastern Conference, talks about the decision to cancel the remaining games in the SEC NCAA college basketball tournament, in Nashville, Tenn. College sports leaders have repeatedly said there can be no college sports without campuses being open to students. And those decisions will be made with guidance from state and local public health and government officials. (AP Photo/Mark Humphrey, File)

The SEC announced Thursday that the revenue distribution for 2019-20 fiscal year totaled $657.7 million. The average amount distributed to each of the 14 schools, excluding bowl game award money, was slightly over $45.5 million per school.

The revenue total includes $637.7 million directly from the SEC office, plus an additional $20 million retained by schools that participated in bowl games during the 2019-20 football season.  Nine of the 14 SEC schools appeared in bowl games, including the 2020 CFB National Champions LSU.

According to the release, the money is comprised of revenue generated by television agreements, post-season bowl games, the College Football Playoff, the SEC Football Championship, the SEC Men’s Basketball Tournament and NCAA Championships. Despite the COVID-19 pandemic canceling several sports’ seasons and NCAA championships, the total revenue distributed increased by $6.7 million from the 2018-19 fiscal year.

Where the Money Goes

The SEC revenue distribution goes directly towards improving the experience of the student-athletes both athletically and academically. More than 5,400 student-athletes across the SEC currently receive financial aid. The 2019-20 fiscal year was the fifth time SEC athletics programs have provided funding for scholarships based on the student-athletes’ full cost of attendance.

In addition to academic scholarships, a portion of the funds received is used to sponsor student wellness programs, research programs, development programs and renovation of academic facilities. This helps the more than 2,400 student-athletes who do not receive direct financial assistance.

Southeastern Conference Commissioner Greg Sankey said he is proud of the support the 14 member universities are able to provide to the student-athletes.

Sankey assured that the SEC is committed to expanding the academic missions of the universities and improving the well-being of its student-athletes.