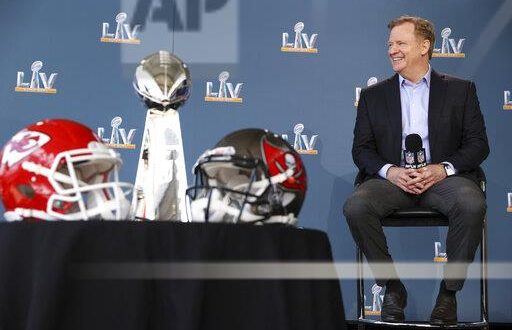 The annual State of the NFL news conference took place this Thursday by NFL Commissioner Roger Goodell. Goodell commends the league for its ability to adjust through the uncertain times of COVID-19. In addition, the NFL Commissioner talks of the need for further adjustments to right the wrongs of current social issues.

Adapting to the Times

After the conclusion of Super Bowl LV this Sunday, the NFL will have completed their season without one canceled game. The franchises seemed to collectively come together for the sake of the season. The NFL successfully implemented physical distancing, mandatory mask-wearing, no group meals, and virtual meetings only which made for a fairly healthy season. Furthermore, Goodell told the conference that the league has learned a great deal in the past year.

“Although I can’t identify all of the obstacles left,” Goodell said. “They’re less than what they were last year because we’ve had the experience.”

Through the many adaptions, some franchise’s found new protocols to even work better than the old ones.

Due to the success of the past season, the NFL is now making arrangements for international play in 2021. Goodell revealed that he is optimistic the league can hold games abroad in the U.K. and Mexico next year.

NFL commissioner Roger Goodell has said the league is planning for the International Series games in the UK to go ahead in 2021 but that a final decision will depend on COVID-19. ⬇

Along with the pandemic, the NFL has recognized and has begun adjustments towards eradicating social issues. Goodell acknowledged the lack of diversity within NFL head coaches with it being only three African American coaches out of 32. Through continued discussions, Goodell wants the league to understand the issues fully so they can move accordingly.

Furthermore, Goodell also recognizes that these social issues did not begin this past year, rather they have been occurring throughout the history of the NFL. The NFL plans to work with players on identifying aspects that need to be corrected.

“There’s a commitment on behalf of the entire ownership, not just financial but any resources,” Goodell said. “We look forward to making a difference in our communities.”

Parker Welch is a Junior at the University of Florida majoring in Sports Media at the College of Journalism & Communications.
@parkerrwelch
Previous Gators Baseball Earns Unanimous Preseason No.1 Ranking
Next SEC Announces 2019-20 Revenue Distribution