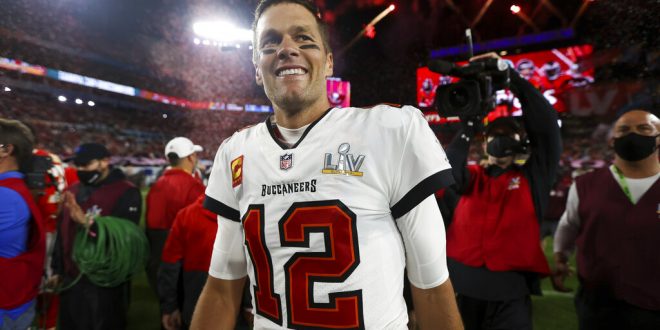 Last night’s championship was Brady’s tenth Super Bowl appearance, the most in NFL history. He also won his fifth Super Bowl MVP following Super Bowl 55, another NFL record. No one is even trailing behind him with four MVPs, and there is only one player with three.

Brady is breaking records left and right in the league, right down to his age. At 43, he is the oldest player competing for the Lombardi Trophy. During his time in the Super Bowl, he completed an astonishing 277 passes, threw for 3,039 yards, and scored 21 touchdown passes.

Tom Brady is the 1st player in NFL history to win a Super Bowl and throw 50 TD* in the same season.

Before the Bucs, Brady was with the New England Patriots for 20 years. He signed with Tampa Bay on a two-year contract in March and had to adjust to a new team and coach staffing amidst the Covid-19 pandemic.

Fans were excited to see the competition between the quarterbacks from differing generations. We had chiefs QB Patrick Mahomes out of the 2017 NFL draft vs Tom Brady, who is in his 21st season with the league.

However, Mahomes was no match for the veteran. Brady finished the game with three touchdowns and completed 21 of 29 passes for 201 yards, whereas Mahomes didn’t score and ended the game with 26 of 49 for 270 passing yards.

Brady highlights his team, explaining that the team wouldn’t have been able to reach success without the work ethic of players like Rob Gronkowski and wide receiver Antonio Brown.

Sara Dastgerdi is a current student at the University of Florida.
Previous Buccaneers are Super Bowl Champs; Tampa the New Titletown
Next Pat Dooley’s Back Nine: February 8