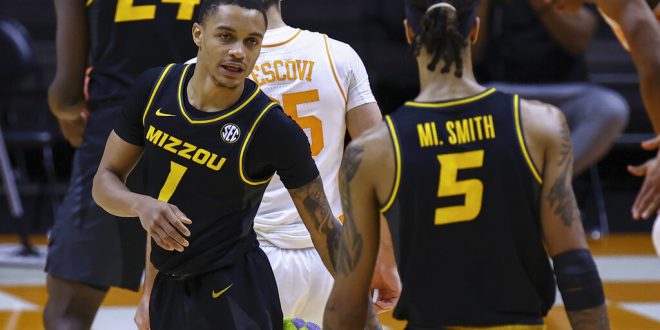 The tenth-ranked Missouri Tigers head to Oxford to take on Ole Miss in the latest SEC showdown on Wednesday at 8 p.m.

The Tigers are the only team in the SEC to crack the top 10 in the most recent AP Poll. There’s a reason for that. Missouri topped former No. 10 conference foe Alabama on Saturday with a final score of 68-65. That added to another SEC win against Kentucky earlier in the week propelled the Tigers into that No. 10 spot.

Redshirt senior Dru Smith seems to have been a huge key for Missouri in the past two games. Against Kentucky, Smith was the leading scorer, putting up 26 points on the Wildcats. Against Alabama, Smith still looked impressive, putting up 16 points, making it his eight-consecutive games with a double-digit scoring performance.

According to assistant coach Cornell Mann, another key for the Tigers will be to both move the ball faster while also staying aggressive. He says that Ole Miss can be an aggressive team and Missouri will have to work to keep up with that.

The Ole Miss Rebels have not found the same success as their SEC opponent this season. The Rebels are 10-8 on the season and just 5-6 in conference play. However, Ole Miss has found some success as of late. The Rebels are currently on a two-game win streak. On Feb. 2, they took down the ranked Tennessee Volunteer team 52-50. They also toppled over Auburn for the second time this season in an overtime showdown.

On Ole Miss, Mann says they are an aggressive team that has been playing well. However, he also said that sometimes the game can get away from the Rebels and Missouri will have to capitalize on that.

While the scales seemed tipped in Missouri’s favor heading into the game, Ole Miss definitely has a chance. While Missouri has just three losses this season, all three have been to SEC opponents. This includes losses to both Tennessee and Auburn, both teams that Ole Miss has managed to defeat.