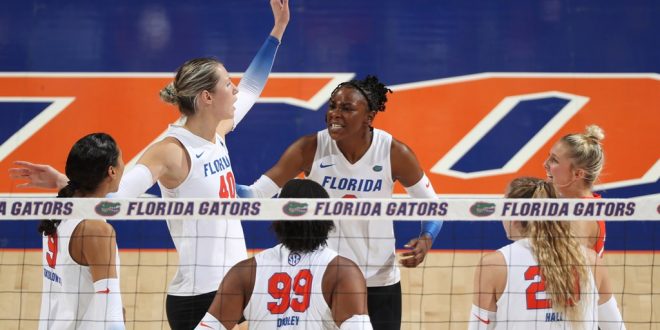 The ninth-ranked Florida Volleyball team moves to 10-2 overall after a two-match sweep over the LSU Tigers. Florida closed out the series with a win in four sets Thursday night in the Exactech Arena.

The Florida Gators put on a great offensive show for their cardboard cut-out filled stands. Outside hitter T’ara Ceasar put down 20 kills for a .425 hitting percentage and 2 aces for her team achieving a season-high for herself. During the post-game conference, Ceasar admitted that she did not even know she reached a season-high because she tries not to focus too much on the numbers.

Then, Thayer Hall sat right behind Ceasar with 19 kills of her own. The two outside hitters can credit some of their success to setter Holly Carlton. Carlton grabbed herself a career-high mark when she contributed 55 assists to her hitters.

Then, if that wasn’t enough, Carlton added seven digs, four kills, three blocks, and three aces. Ceasar noted that Carlton is definitely considered an all-around utility player and contributes many skills to the team.

On the defensive side, Florida kept their backcourt fairly clean. Libero Elli McKissock registered 22 digs. Then, Ceasar added 15 digs of her own making for her second season-high of the night.

Despite LSU’s loss, the Tigers were able to keep the match tight throughout the four sets. Florida won the first set at 25-17 but then lost the second set to LSU at 25-22. Then, Florida was able to pick themselves back up and finish the third set at 25-20 and finally closed the match at the fourth set with a score of 25-19.

According to Gators Head Coach Mary Wise, LSU presented a tough match because they very rarely made errors which forced the Gators to earn each point that posted on the board.

The Florida Gators typically do not need four sets to take down their opponent. T’ara Ceasar concurred with her head coach and explained that LSU kept their gameplay clean. After losing the second set, the Gators needed to adjust their passing to hit their target more accurately.

The Gators’ next two-match series action will be against the Mississippi State Bulldogs starting on Feb. 19. Both matches will begin at 6 PM in Starkville, Mississippi.

Parker Welch is a Senior at the University of Florida majoring in Sports Media at the College of Journalism & Communications.
@parkerrwelch
Previous Magic Drop Third Straight Game in Loss to Warriors
Next Gainesville Area Boys and Girls Basketball Weekend Outlook