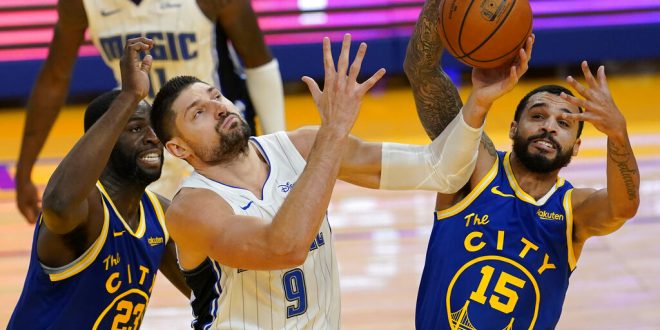 The Orlando Magic dropped their third straight game on Thursday night after losing to the Golden State Warriors by a final score of 111-105.

The Magic were missing four key players heading into their game against the Warriors. Additionally, Orlando also saw guard Frank Mason III exit the game early due to a strained right groin injury.

But despite not having some of these role players, the Magic still managed to play a tight game with Golden State all the way to the end. Perhaps the biggest reason for this was the scoring contributions Orlando got from a handful of players.

Leading the way in all scoring for the Magic was center Nikola Vucevic, who finished the night with 25 points. Furthermore, Vucevic also led the team in rebounding, hauling in 13 by the game’s conclusion.

Orlando also got big performances from small forwards Dwayne Bacon and James Ennis III, as well. The two managed to score 37 points combined for the Magic.

In all, Orlando managed to have four players in double figures by the game’s end. Guard Terrence Ross came off the bench and put up 20 points to also assist in the scoring efforts for the Magic. Additionally, Ennis III and Vucevic both managed to finish with double-doubles, as well.

While numerous players were knocking down shots for Orlando Thursday night, it wasn’t enough to keep up with the high-scoring, explosive Warriors’ offense.

Golden State, similar to the Magic, also received big contributions from a handful of players to help pick up a victory. But arguably the biggest performance came from point guard Stephen Curry, who finished his night with 40 points and a whopping 10 three-pointers.

Player of the Game || @googlecloud pic.twitter.com/mBTKkeBZIw

Curry also had five assists and eight rebounds to go along with his 40 points. The Warriors as a team attempted a franchise-record 30 three-pointers in the first half and went 20 of 50 from the arc overall.

In addition to Curry’s big game, Golden State also got big performances from forward Andrew Wiggins and guard Kelly Oubre Jr. The two combined for 38 points and 17 rebounds to help carry the Warriors to a win.

Orlando will look to snap this three-game skid tonight when it takes on the Sacramento Kings. Tip-off is set for 10 p.m.

Golden State will look to make it three wins in a row on Saturday when it faces the Brooklyn Nets. Tip-off for that game is set for 8:30 p.m.