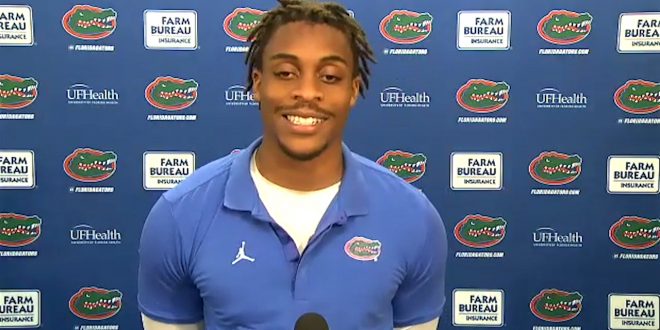 Mohamoud Diabate during a press conference on February 21, 2021. (Courtesy of Gator Vision)

Spring ball kicked off for the Florida Gator football team on February 18 and they are locked in. Gator linebacker Mohamoud Diabate and the rest of the squad aren’t dwelling on last season or their fall in the Cotton Bowl, but rather looking ahead to what 2021 brings.

As a team, there will be lot’s of change offensively, but also plenty of room for improvement on the defensive end of things. Diabate believes that all the little mistakes, miscommunications and even one guy fitting the gap too far can have a drastic effect on the team.

“Coach Grantham, coach Mullen and the rest of the staff are working extremely hard to make sure we can fix those issues and I have a great deal of confidence that we are going to get that done,” he said.

It was apparent Florida’s defense struggled in comparison to their machine-like offensive artillery run through quarterback  Kyle Trask last season. Diabate himself came across his own issues at linebacker, as he was never given that time to get valuable reps due to COVID-19 and the lack of spring ball last year. From the beginning to end of the year, Diabate looked like a completely different player and should get fans excited knowing how high of a ceiling he has.

“I didn’t have the spring or anything, so what a lot of people don’t realize is I played D-end my whole life,” Diabate said. “So [I have never] had to backpedal with [anybody]. And then we come back from quarantine and I have to do that. The beginning of the season was really a feeling out process.”

Diabate recorded 63 total tackles last season and has continuously showcased his athleticism and IQ throughout his time as a Gator.  And he hopes to continue to improve.