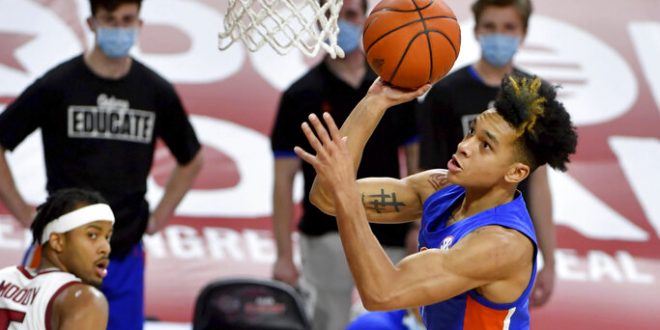 Florida guard Tre Mann (1) is called for an offensive foul as he tries to drive past Arkansas forward Jaylin Williams (10) during the second half of an NCAA college basketball game in Fayetteville, Ark. Tuesday, Feb. 16, 2021. (AP Photo/Michael Woods)

A Beatdown From Start to Finish

Gators men’s basketball eased its way to a 74-57 victory over Auburn as it completed one of its most dominant performances on the season.

Florida annihilated the Tigers from tip-off all the way to the buzzer as UF led by 22 points heading into halftime. The Gators had Auburn in the palm of their hand as it increased the lead to 24 points towards the end of the second half.

UF throttled the Tigers up and down the court as it advanced to a 12-6 overall record and the fourth-best team in the SEC.

Auburn felt Sharife Cooper’s absence as he was unable to play due to an ankle injury. The star freshman guard had been averaging 20.2 points and 8.1 assists on the year heading into the SEC matchup. Without his presence, the Tigers had difficulty putting up points on the scoreboard and facilitating the basketball.

Auburn began to look out of sorts as the top scorers in the game were not very efficient. Tigers guard Devan Cambridge led the team with 14 points; however, he went 5-13 shooting from the floor.

Florida returns back on the road as it travels to Kentucky to face the Wildcats. Florida will be well-rested for their contest with Kentucky as the team looks to extend their win streak to three games.

Don’t miss the Gators back in action on the court as tip-off is set for 4 p.m. Saturday afternoon.

Angel is a student at the University of Florida. She is a Multimedia Journalist who is currently a Sports Reporter and Writer at ESPN Gainesville. Follow her on Twitter (@angelcwells) and Instagram (@angel_wells). Be sure to follow her NFL Twitter account to stay up to date with the latest NFL news. (@UpToDate1NFL)
@angelcwells
Previous Wheeler Posts First Program Triple-Double to Help Georgia Cruise Past LSU 91-78
Next Ole Miss Holds Tight to Upset No. 24 Missouri