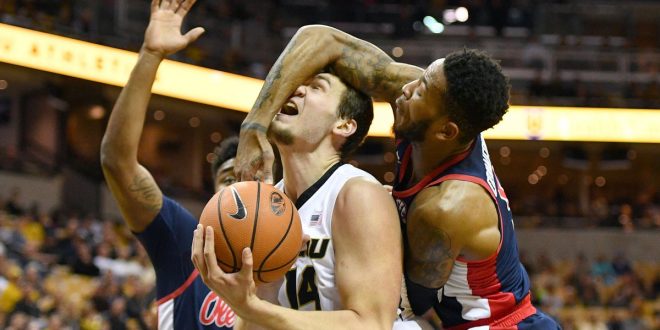 Don’t count them out just yet.

Ole Miss completed a season sweep against No. 24 Missouri in an ugly 60-53 Tuesday night to stay in the NCAA Tournament discussion. The Tigers have had no issue knocking big-name tournament contenders out of the questions, but something about the Rebels they just can not shake.

The Tuesday night win follows an Ole Miss loss to Mississippi State on Saturday and the Rebels were determined to get back on their feet to defeat the Tigers for a second time this season. The first match-up between the two resulted in an 80-59 blowout by the Rebels earlier this month.

Ole Miss refused to trail in the first half but was tied at 17 with just under 10 minutes to play in the half. The Rebels were then able to spark a 16-7 run to take a 33-24 lead heading into the locker room at halftime. Ole Miss was up as many as 13 points early in the second half, but Missouri shot back with an 11-0 run to take the lead halfway through. Ole Miss turned the ball over seven times and made just two field goals within the first 10 minutes of the second half.

The Tigers were not ready to give up coming out of the locker room. Missouri had a 43-41 lead with just under 10 minutes to go in the second half but the Rebels fought hard to control the momentum keeping the score even or in their favor for the rest of the game. The Rebels allowed the Tigers only one field goal in the last three minutes of the game to seal the win.

The Tigers were led by Kobe Brown with 12 points while Mark Smith added 11 and Jeremiah Tilmon finished with 10.

This was a crucial victory for the Rebels NCAA Tournament hopes. The Rebels have now won their last five of six games played, including three wins against Top 25 teams.

The Tigers have lost four of their last five games to non-ranked teams as their tournament hopes are starting to fade.

Ole Miss is on the road again this weekend in Music City as they take on Vanderbilt on Saturday while Missouri hopes to get back on track at home against Texas A&M.