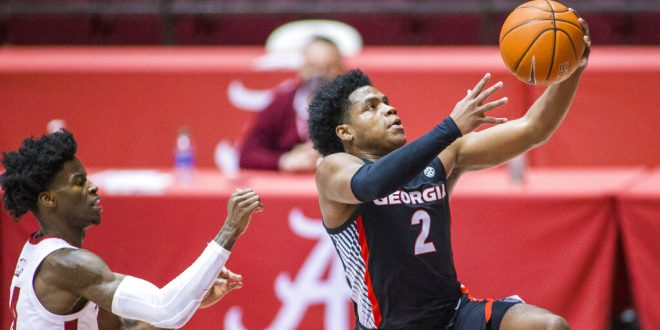 Georgia guard Sahvir Wheeler (2) gets a layup past Alabama guard Keon Ellis (14) during the first half of an NCAA basketball game on Saturday, Feb. 13, 2021, in Tuscaloosa, Ala. (AP Photo/Vasha Hunt)

With 10:46 remaining in the second half, Georgia’s Sahvir Wheeler drove to the hoop and threw an alley-oop pass to K.D. Johnson to put the Bulldogs up by 22 over LSU. This was Wheeler’s 10th assist of the tonight, allowing him to record the first triple-double in Georgia basketball history in the team’s 91-78 win over the LSU Tigers Tuesday night.

Three other players were in double-digits for the Bulldogs. Toumani Camara contributed a double-double, scoring 22 points and grabbing 10 rebounds. Tye Fagan added 18 points and Johnson tallied 21 points off the bench. Although the team struggled from three-point range, the Bulldogs were able to shoot 46.9% from the field.

The Bulldogs used a strong first half to dominate the Tigers offensively, going on a 12-0 run near the end of the first half to take a 45-29 lead as the halftime buzzer sounded.

A high-scoring second half from both teams allowed the Bulldogs to keep control of their lead and pull away from the Tigers by 14 points. The Tigers scored 46 points in the second half, but it was not enough to lead a comeback, as Georgia scored 49 points in the half.

The Tigers shot a decent 40.3% from the field but struggled from three-point range and the free-throw line. The team shot 26.7% from three and had a disappointing free-throw percentage of 59.3%.

Both teams will play one more regular-season game Saturday before playing in the SEC tournament starting March 10. Both Georgia and LSU have home games, as the Tigers host South Carolina and LSU takes on Vanderbilt.