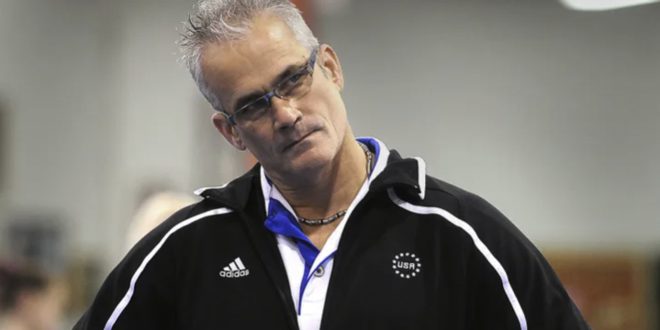 John Geddert watches his students during practice in December 2011. Geddert, a former U.S. Olympics gymnastics coach with ties to disgraced sports doctor Larry Nassar, killed himself Thursday, Feb. 25, 2021, hours after being charged with turning his Michigan gym into a hub of human trafficking by coercing girls to train and then abusing them. Geddert faced 24 charges that could have carried years in prison had he been convicted. (Greg DeRuiter/Lansing State Journal via AP)

Geddert’s body was located by troopers at the rest area on EB I-96 in Clinton County at 3:24 pm. Investigation is ongoing; no further details will be released at this time. https://t.co/flr09gDm2X

Michigan State Police confirmed that Geddert’s body was found at a highway rest area at 3:24 p.m. Geddert, 63, was scheduled to turn himself into police at 2:15 p.m.

“My office has been notified that the body of John Geddert was found late this afternoon after taking his own life,” Michigan Attorney General Dana Nessel said. “This is a tragic end to a tragic story for everyone involved.”

Geddert was charged with 24 felony crimes on Thursday, including 20 counts of human trafficking and two counts of criminal sexual conduct. In court documents accompanying the charges, prosecutors claim that Geddert engaged in “sexual penetration” and “sexual contact” of a minor between the ages of 13 and 16 in January 2012. The charges stem from allegations that he physically, emotionally and sexually abused his gymnasts.

Geddert was also charged for lying to a police officer during the investigation of Team USA doctor Larry Nassar. The pair worked together for over 20 years. Geddert reportedly knew Nassar was sexually abusing patients but neglected to inform authorities when questioned back in 2016.

The human trafficking charges relate to Geddert’s inhumane treatment of young gymnasts. The attorney general’s office alleged that Geddert “subjected his athletes to forced labor or services under extreme conditions that contributed to them suffering injuries and harm.” Geddert then used coercion and threats to intimate these athletes and prevent them from speaking out.

Sarah Klein, a former gymnast who trained under Geddert and received treatments from Nassar, released a statement regarding the news of his death. “His suicide is an admission of guilt that the entire world can now see,” Klein said.

Previous Lightning get their third straight win over Carolina
Next Who Can Be The Next Kyle Pitts?