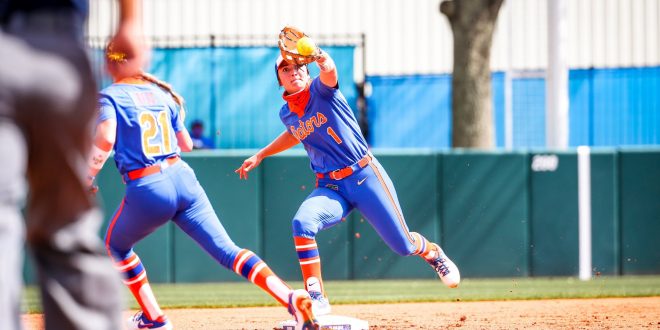 The Florida Gator softball team (10-0) exploded for five runs in the bottom of the fourth inning to earn their 10th win in as many games after beating the Louisville Cardinals (3-5) on Saturday. The win marked Florida’s first over a Power-5 opponent in 2021.

Elizabeth Hightower earned the win for the Gators in the circle, and Taylor Roby was credited with the loss.

The only scoring for both teams came in the fourth inning. After each team only put up zeros on the scoreboard through three, the Cardinals broke the stalemate with an RBI single. Cardinals catcher Rebecca Chung earned her team’s first hit of the day with a line-drive triple to left field.

On the very next pitch from Hightower, Camryn Greenwood capitalized with a soft liner into right field for the RBI single. But the Cardinals’ lead wouldn’t last long. Cheyenne Lindsey and company made sure of that.

A walk and two singles loaded the bases for the Gators with only one out in the home half of the fourth. With Julia Cottrill, Avery Goelz and Jaimie Hoover all on base, Bryn Thomas came up to the bat as a pinch hitter.

In only her third at-bat of the season, Thomas drew a walk on a full count to score Cottrill and tie the game. That was only just the beginning.

Cheyenne Lindsey came up to bat and ripped a line drive right down the first-base line for a double, scoring Avery Goelz and Jaimie Hoover, giving the Gators a 3-1 lead.

B4 | Gators take a 4-1 lead on a bases loaded walk from @bryn_thomas4, a two RBI double by @cheylindz and a SAC fly by @hmadamss11 pic.twitter.com/baH6jg3QDU

From there, a Hannah Adams sacrifice fly and a double steal pushed the Florida lead to 5-1 where it would stay for the remainder of the game.

Hightower turned in her second straight complete-game performance and earned her fourth win of the season in the game. The only two hits she gave up came in the fourth inning, and she added five strikeouts to her line.

Gator head coach Tim Walton said Hightower wasn’t at her best today, but she still turned in a good effort.

Hightower, herself, admitted that she didn’t have her “best stuff” today. She explained how she persevered, though, even when she wasn’t at her best.

The Gators also turned in a solid performance at the plate as a team. Florida outhit Louisville 7-2, with Hannah Adams, Avery Goelz and Jaimie Hoover turning in multi-hit performances.

After Saturday’s game, Adams has turned in seven multi-hit games out of the 10 games the Gators have played in. When asked about the senior second baseman’s hot start to the season, Walton said he pegs her as one of the best in the country.

Adams now boasts a .516 average on the season, which surpasses Charla Echols as the team leader in batting average. Echols went 0-for-3 on the day.

The Cardinals and Gators will face off again Sunday at 10 a.m. as the first game of Florida’s doubleheader. The Gators will play McNeese State as the second leg of that doubleheader, with first pitch set for 1 p.m.

The Gators ride a 5-run fourth inning to victory in their first game against a Power-5 team all season.

Hightower pitched her second complete game of the season and earned her fourth win while striking out five.

I'm a third-year student at the University of Florida passionate about storytelling and sportswriting. My goal is to work in communications for a professional sports team after I graduate.
Previous Thomas Earns Two “10s,” Gators Clinch SEC Title in Win Over Auburn
Next Gator Men’s Hoops Beats Kentucky in Lexington 71-67