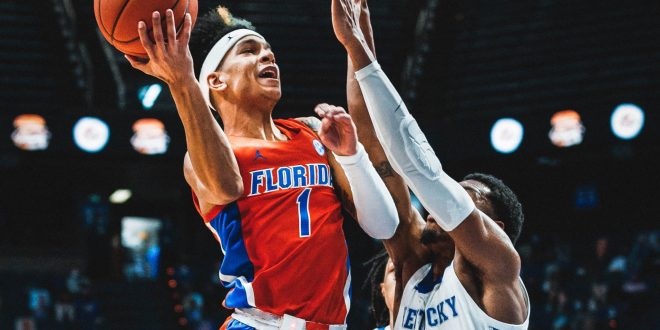 In an SEC men’s basketball match-up, the Florida Gators defeated the Kentucky Wildcats 71-67 Saturday in Lexington.

Florida and Kentucky met in their second and final meeting for the regular season. Kentucky defeated the Gators on January 9th by 20 points in Gainesville and hit the road looking to even the score and they did it, earning a 71-67 victory.

In the dynamic road win, all eyes were on sophomore Tre Mann who had an outstanding performance with 21 points and five rebounds. Three fellow Gators also landed in double-figures for the contest in Tyree Appleby (11), Anthony Duruji (10 ) and Colin Castleton (14).

Kentucky got off to an early lead but then Gator coach Mike White went to a zone defense in the first half that he basically stayed with the rest of the game.   That slowed the Kentucky attack and allowed the Gators to stay in the game and eventually take a lead in the back and forth contest.  Appleby went to the free-throw line with 23.7 seconds making both shots putting the Gators up 69-65; then Tre Mann landed two free throws in the last 10 seconds to seal the Gators win. Florida increases its record to 9-5  in the conference with the win.

Mann had this to say about bout the Gators performance.

“We had a couple of turnovers in the end, but I feel those last two minutes, me and Tyree (Appleby) and the whole team – but it started with me and Tyree – the whole team took care of the ball a little bit more. We had a little bit more composure. And yeah, that’s really it – we valued the ball. We took ‘A’ shots today. We took a lot of ‘A’ shots, we had a couple of ‘F’ shots, but it’s getting better every game. As long as we do that, we’ll have a good chance of winning every game.”

Next Up For The Gators

Heading into the last week of regular season play, the Gators return home to Gainesville hosting the Missouri Tigers in their final home game for Senior Night.

The Wildcats now fall to 7-8 in the SEC and the loss was a crucial one as they try to make the NCAA Tournament field; most now believe the Wildcats will have to win the SEC Tournament to have a true shot at making the NCAA field.

Davion Mintz led the Wildcats with 21 points. Alongside him were also three Wildcats players in double digits BJ Boston (13), Jacob Toppin (11), Isaiah Jackson (11), but was not enough to take down the Gators on this day in Lexington.

Kentucky heads to Mississippi to take on the Ole Miss Rebels in their next match-up.