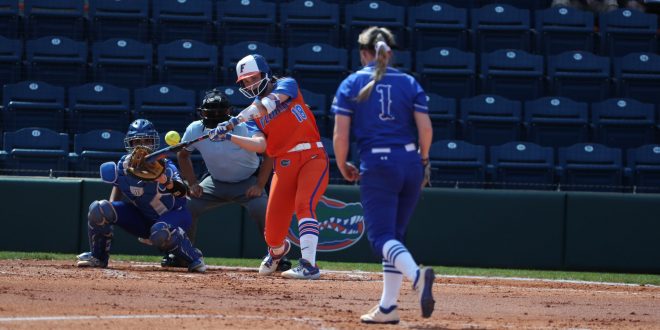 With one out in the bottom of the eighth inning, Florida’s Hannah Adams stepped up to the plate, looking to get on base and potentially help the sixth-ranked Gator softball team outlast the McNeese State Cowgirls. Behind in the count with two strikes on her, Adams waited back on a fastball and did more than just get on base. She crushed the ball over the right-center field wall, propelling the Gators to a 12-0 start to the season and a 1-0 victory over the Cowgirls.

In the first game of the team’s Sunday doubleheader, the Gators outlasted the Louisville Cardinals 2-0.

Chronister propels Gators in game one

Katie Chronister pitched another outstanding game in the circle for the Gators. Sitting down the 3-6 Cardinals through the first three innings, Chronister ran into trouble in the top of the fourth inning. Despite striking out Cardinals catcher Taryn Weddle, she was able to reach base on a passed ball. On the next pitch, Cardinals designated-hitter Taylor Roby ripped a single to right-center field to set up first-and-third with one out.

After a mound visit from head coach Tim Walton, Chronister dug deep and struck out Makayla Hurst looking. Now with two outs in the inning, Chronister got Rebecca Chung to pop out to first base and get out of the inning with no runs allowed.

“Coach was out there and made sure I still had confidence in what I was doing,” Chronister said. “He’s just giving us a little check-in and making sure we all know what we’re going to do. Giving us a little pick me up so we can go out and execute like we did in the latter half of that inning.”

Hannah Adams followed Lindsey’s single with one of her own, and Kendyl Lindaman drew a walk to set up bases loaded with only one out for Charla Echols. Echols was able to bring in the runner on third with a sacrifice fly, extending the Gator lead to 2-0.

Chronister continued into the sixth inning where she easily retired the first two batters. But Chronister gave up two, two-out singles to set up the Cardinals with second and first with two outs. On the next pitch, the Gators executed a perfect pickoff play, as Gators catcher Julia Cottrill picked off Roby at second base to keep the Gators ahead 2-0.

After the Gators went down 1-2-3 in the bottom of the sixth, Walton made the decision to pull Chronister and bring in Elizabeth Hightower to attempt to close the game out. The move paid off, as Hightower struck out her first two batters and got the last Cardinal to pop-up, allowing the Gators to win 2-0.

Strong pitching from the Gators allowed Adams the opportunity to come up to the plate in the eighth. Natalie Lugo started in the circle, pitching 5.1 innings and giving up only one hit, while  striking out four Cowgirls.

In the top of the fifth inning, Lugo had runners on first and third with one out, with the 3-11 Cowgirls looking to get on the board first. But a quick 5-4-3 double-play ended the rally, allowing Lugo to get out of the inning with no harm done.

Hightower came in for relief in the second straight game, earning the win with 2.2 innings of work out of the bullpen, striking out three.

T7 | @ElizabethH_99_ with quality work in the circle since entering with one out in the 6th. We head to the bottom of the inning.

Despite pitching a complete game yesterday, Walton said he made the right decision to bring in Hightower to close out the first game and eventually win the second game.

“It’s hard to argue right?” Walton said. “Two shutouts, so it was a pretty good decision. Tons of statistics and I think I used them all. I may have brought in Elizabeth a batter too late, but ultimately I thought we made the right decision.”

The Gators will next play New Mexico State, Wednesday at 6 pm at home. The Gators will take on the Aggies before playing the 15th ranked Florida State Seminoles in a home and home series starting Friday.