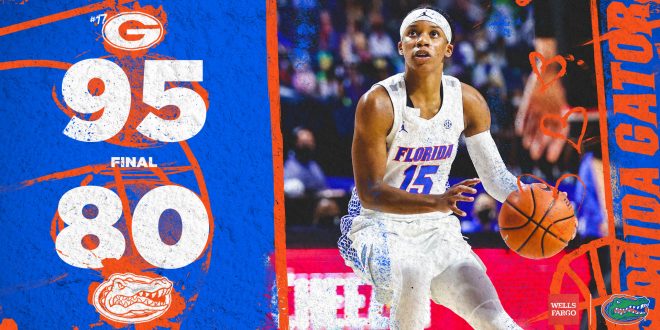 It was Senior Day for the Florida women’s basketball team when it faced nationally ranked Georgia on Sunday.

The Gators came out to a hot start in the first quarter leading against the Bulldogs. Jordan Marriet came out scoring the first two baskets for the Gators setting the tone. And at halftime, Floriad took a slim three point lead, 41-38, into the locker room.

Jordan Marriet and Floor Toonders had themselves a night as both  freshman went off for 16 points each. Toonders was 7 of 8 from the field.  Also scoring in double figures for Florida were Kiki Smith (16) and Nina Rickards (14).

Florida in its final home game of the season sent off their senior Gators, Kiki Smith, Emily Sullivan, Cydnee Kinslow, and Danielle Rainey,

Although the Gators lost the match up against Georgia. Florida played one of its better games of the season. The Gators conclude their regular season schedule at 10-12, 3-11 SEC.

Gator coach Cam Newbauer had this to say about his teams performance.:

“You know we scored and we’ve been able to score in all these games but our defense is what really struggled. And that’s what happened again today. That’s a team that’s always been great defensively but they have really found their rhythm offensively. They just have so many weapons on the floor that can score; you know we had some really good moments, but overall it wasn’t enough. I thought we did fight and we competed really well. I thought we had some players get better today.”

Next up The Gators hit the road to Greenville, South Carolina to play in the SEC Tournament; the Gators will face Auburn Wednesday at 4pm

Both teams exchanged baskets back and forth throughout the game having 12 lead changes, but Georgia came was able to hit key baskets in the second half to come out on top 95-80.

The Bulldogs will also be in the SEC Tournament but they will not have to play on the first day of the tournament, which is Wednesday.