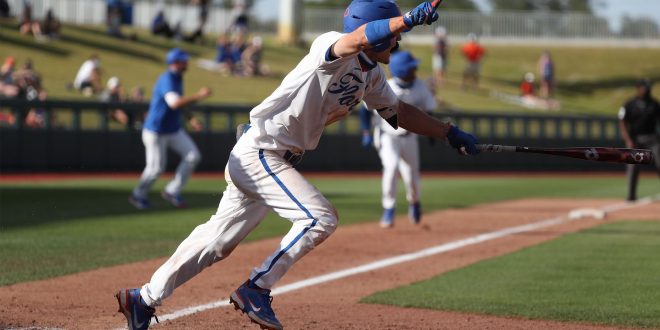 It was a dramatic finish on Sunday as the Florida Gators pull off their first sweep of the season. What started as a shaky first inning settled into a quick offensive burst from Florida. Samford would not go quietly though. The Bulldogs answered back eventually took the lead after capitalize on Florida’s bullpen. Again, the Gators fought back reclaiming the lead in the eight. Not for long as Samford would tie the game on a solo homerun off the bat of Sonny Dichiara, his second of the day. Extra innings seemed inevitable until Jacob Young stepped to the plate.

Young on a run

Young, who is on a 26-game hit streak dating all the way back to 2019, has been clutch for the Gators at the plate. In Sunday’s matchup, he went four-for-five with two RBIs. Hitting a double in the second inning to make the game 4-2, his biggest hit came hours later in the bottom of the ninth. Josh Rivera reached first off a throwing error from Samford second basemen Brooks Carlson. Rivera continued his trek around the diamond making it all the way to third due to a balk and passed ball. With no outs, a sacrifice fly would win the game for Florida. Samford gets two outs. with a runner on first and third. None other then hot-hitter Young was due up. He wasted o time capitalizing on the first pitch launching into the outfield to win the game.

Hunter Barco was on the hill for Florida after giving up six runs just a week ago to Miami. While he had a rocky first inning giving up a two-run blast from Dichiara, he settled into the game. Barco was in command on the mound retiring batter after batter. Barco struck out 10 batters on Sunday. He would leave the game in the sixth with two runners on.

This is where things take a turn for Florida. The bullpen, which has been interesting to say the least, had their shot at retiring the side. Three pitchers took a stab at finishing the sixth inning after Barco’s departure. Franco Aleman relieved Hunter, but two runs scored to make it a one-run game. Chase Centala came in giving up three runs to give Samford the lead. Florida’s bullpen has struggled so far this season with closing out games in the ninth. Yesterday, it was the sixth that got the better of them.

It’s a new week for college baseball, and the Gators look to extend their three-game win streak on Wednesday when they host FAU. The Owls, who are coming off their own weekend sweep, have suffered only one loss this season. The two teams have not met since April of 2019. Gators losing that game after a four-run ninth inning from the Owls to take the game 13-11. First pitch is at 6 p.m.