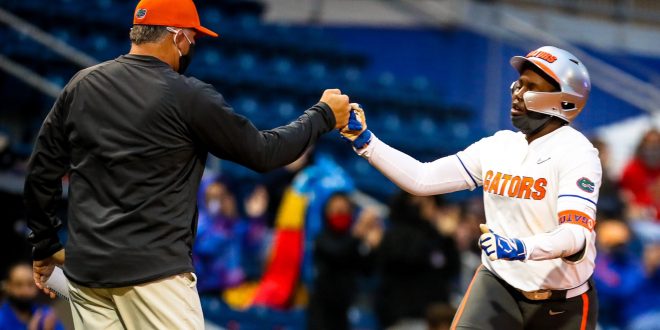 Jaimie Hoover rounds third base after her home-run in the Gators 6-2 win over New Mexico State. Photo Courtesy @GatorsSB Twitter.

With one out in the bottom of the first inning, Jaimie Hoover took a ball to put the count at 1-0. On the next pitch, she sat back on a fastball and crushed it over the right-center wall, earning her first home run of the season. With two runners on base, she extended the Gators lead to 4-0, as the home run proved to be a difference-maker come the seventh inning. Hoover and company helped the Gators defeat the New Mexico State Aggies 6-2.

“I was looking for something to drive,” Hoover said. “I got a pitch that I really liked and I just swung at it.”

Hannah Adams led off the bottom of the first inning with a single and Kendyl Lindaman walked to set up first and second with one out for the Gators. Julia Cottrill came up and ripped a rbi double to left field to put the Gators on the board first 1-0. After Avery Goelz flew out to center field, Hoover came up with two outs and crushed her home run, putting the Gators up 4-0.

B1 | RBI double from @juliacottrill and the #Gators are on the board with the lead 1-0 over New Mexico State! pic.twitter.com/BFmXzVtykZ

The team would score insurance runs in the bottom of the sixth inning. Katie Kistler pinch hit for the Gators, drawing a walk and later stealing second base. Emily Wilkie sacrificed Kistler over to third and Cheyenne Lindsey brought Kistler in on a sacrifice fly, stretching the team’s lead to 5-1.

With two outs in the inning, Hannah Adams came up to the plate and demolished a home-run into right field for her second straight game with a home run. This put the Aggies away for good, extending the Gator lead to 6-1.

“I don’t get to hit home runs very often,” Adams said. “So every time I do it’s really fun.”

Coming into the game leading the nation in shutouts and ERA, Gators pitching had another strong performance against the 3-10 Aggies. Rylee Trlicek started for the Gators on the mound. She ran into trouble in the second inning, when the Aggies scored on a rbi double to left-field. Despite the double, Trlicek was able to strand the runner at second and get out of the inning with only one run allowed.

After giving up a single and a fielder’s choice, Trlicek’s day was done on the mound and head coach Tim Walton decided to bring in Elizabeth Hightower for her third straight relief appearance. Hightower was able to get out of the inning harmless, getting two Aggies to pop out and the third batter to strike out. Hightower would sit down the Aggies until the seventh inning, where she gave up a solo home run to lead off the inning.

Despite the home run given up by Hightower, Natalie Lugo came in to close out the game for the Gators. She got two easy groundballs and was able to strike out the last batter, allowing the fifth-ranked Gators to start the season 13-0.

The Gators used three pitchers throughout the game, as they combined to give up only five hits and combines to strikeout seven Aggie hitters.

“One of the things I talked to our pitching staff about last year was to be ready every single game,” Walton said. We as a coaching staff will work really hard to make sure we clearly communicate with you so that you don’t have to warm up, so your ready when your number is called.”