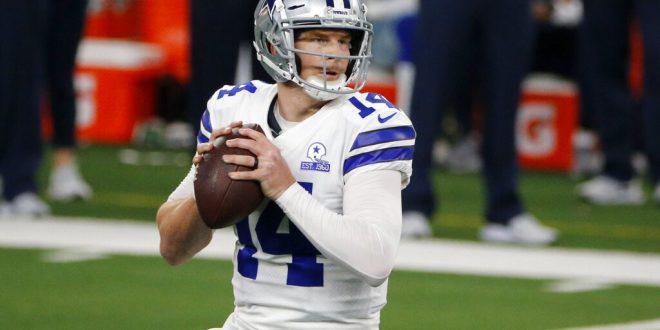 Dallas Cowboys quarterback Andy Dalton (14) drops back to pass in the second half of an NFL football game against the New York Giants in Arlington, Texas, Sunday, Oct. 11, 2020. (AP Photo/Michael Ainsworth)

Last month, reports arose about QB Russell Wilson becoming increasingly frustrated with the Seahawks’ offensive line issues. Wilson is the glue that holds Seattle together; however, the quarterback expressed his feelings on seeking a trade if the team does not upgrade the O-line this offseason.

I’m hearing Russell Wilson’s camp has grown increasingly frustrated by the Seahawks inability to protect the 8 time Pro Bowler. He has been sacked 394 times in 9 seasons. This situation warrants serious monitoring.

Losing the Battle in the Trenches

Last season, the Seahawks’ offensive line ranked 16th in the NFL in pass-blocking. Although that number is not at the bottom of the barrel, it’s the highest the O-line has ranked in that specialty since Russell Wilson arrived in Seattle.

Surprisingly, in 2014 when Seattle won its first Super Bowl in franchise history, Russell evaded pressure behind an offensive line that ranked dead last in the NFL in pass blocking. The Seahawks OL also ranked 32nd on 3rd and 4th down runs that year. These stats put into perspective how if Wilson was given greater protection, Seattle may have a chance to contend for yet another Super Bowl title.

Per ESPN’s Jeremy Fowler, it was reported that the Chicago Bears planned on taking a “big swing” for Russell Wilson. The star quarterback stated how he is intrigued by the Bears’ offensive system and the Chicago market.

The Bears are among Wilson’s preferred trade destinations. Unfortunately for the team, the Seahawks informed Chicago that Wilson is unavailable for trade at this time.

On Tuesday, the Bears signed quarterback Andy Dalton to a one-year deal worth $10 million. With a crowded QB room of Mitchell Trubisky, Nick Foles and now Andy Dalton, it’s less likely for Russell to play for Chicago in 2021.

In Dalton We Trust

The Bears took a leap of faith by signing quarterback Andy Dalton to the team in hopes of solidifying its answer at the quarterback position. Dalton however will need to compete with Trubisky and Foles for the QB1 spot on the team’s roster. It is still unsure whether the Bears will select a rookie quarterback in the NFL draft next month. If so, it will be an enticing quarterback battle to witness and see who becomes the Bears starter in 2021.

Angel is a student at the University of Florida. She is a Multimedia Journalist who is currently a Sports Reporter and Writer at ESPN Gainesville. Follow her on Twitter (@angelcwells) and Instagram (@angel_wells). Be sure to follow her NFL Twitter account to stay up to date with the latest NFL news. (@UpToDate1NFL)
@angelcwells
Previous UCLA Is In!
Next Gator Baseball Prepares For Critical Series Against Texas A&M