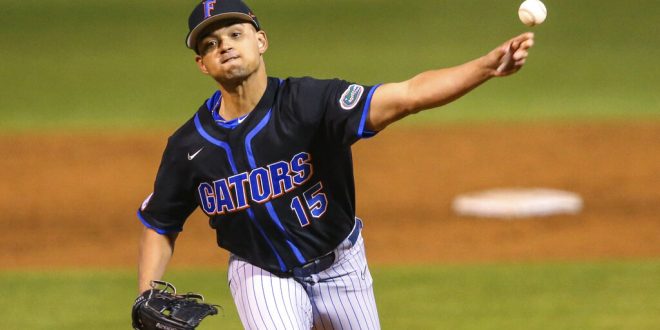 After being spearheaded by Florida State, Gator baseball’s first SEC series sets the tone for the rest of their season. The Gators fell 10-2 to the Seminoles for the first time in five years. Losing a few games is one thing, but Florida wants to make the trek back to Omaha. In order to do so, they must leave a trail of wins behind them.

These first few weeks of the college baseball season have been eye-opening to just how competitive the field is. The Gators came in as the unanimous No. 1 ranked team. This is baseball. You won’t win them all. What matters now is how the Gators perform against the rest of the SEC, starting with the Aggies.

It’s been a stellar season for Florida at the bat, outscoring some opponents by double digits. Overall, the Gators are 13-5. The electric offense has caused quite a stir. Five guys hitting above .300. Nathan Hickey with 21 RBIs and Jud Fabian with six home runs. The offense, minus a few silent nights, has been loud and proud so far. The pitching is where the concerns lie.

Florida’s bullpen has been rocky early in the season. A couple of rough nine-inning debuts mixed with some high-scoring starts leave a lot of vulnerability on the mound. However, much of the pitching woes can be chalked up to untimely injuries that continue to plague the bullpen.

Lost Pogue who was right there with Scott for 4th best on the team. Then Nesbitt who had a 0.00 ERA over 11.2 as a freshman in a short season. Specht just had a MRI Thursday. The pen was deep, deep enough to somewhat overcome those loses. Not every team could. Injuries hurt UF https://t.co/zdDsyU2RNR

Best case scenario for the Gators is Specht’s MRI shows no serious injuries, and he can suit up again. After all, Specht made a team-high nine appearance last year with an ERA of 0.75. That kind of lights-out pitching is what Florida needs.

The Aggies & The SEC

On paper, the two SEC teams share a remarkable resemblance. The Aggies are 15-4 and are on an ll game win streak. They have also demolished teams by double digits. The Gators are the first ranked team Texas has seen this year. However, Texas’s pitching appears to be more settled compared to Floridas. Both Jonathan Childress and Dustin Saenz sport ERAs under 2.00. Additionally, they both have pitched for over 20 innings.

Per NCAA, the top five ranked teams all find a home in the SEC. However, Texas A&M is not one of them. The history of the Aggie vs. Gator baseball is vast, with Texas A&M claiming 12 of the 19 games. However, at home, Florida is 4-3 against the Aggies. Florida bats will no doubt be on against the Aggies, but from the mound, things will need to be more consistent. First game coming Thursday at 7 pm at Florida Ballpark.