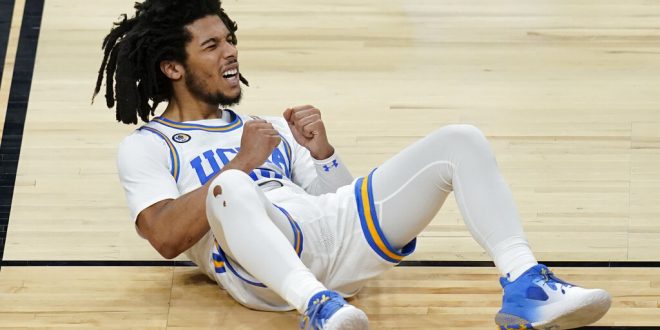 UCLA's Tyger Campbell (10) reacts after a play against Oregon State during the second half of an NCAA college basketball game in the quarterfinal round of the Pac-12 men's tournament Thursday, March 11, 2021, in Las Vegas. (AP Photo/John Locher)

The UCLA Bruins took a sigh of relief after Selection Sunday.

That relief now becomes hope as the men’s basketball team secures a spot in the first four in the NCAA March Madness Tournament.

Nothing better than an evening workout in March.#GoBruins | #MarchMadness pic.twitter.com/0mjVI1oW5e

After coming off a four-game losing streak, the Bruins will take on Michigan State on Thursday.

The Bruins saw the end of the PAC12 tournament in the first round by Oregon State, who went on to win the tournament. UCLA also has no big-name wins this season except for one over Colorado back in January.

A late February loss to Colorado was the beginning of UCLA’s four-game losing streak. The Bruins dropped from first place in the conference to fourth.

The Bruins were also aware of the whispers around the country. To the nation’s surprise, Georgetown and Oregon State had won their conference tournaments. Therefore, bubble teams like UCLA saw their bids disappearing.

Bruins coach Mick Cronin did not worry. Cronin’s assistant coach, Michael Lewis over-looked 90 different mock brackets and assured his boss that UCLA was going to make the NCAA tournament. The last run the Bruins had in the postseason ended with a loss to St. Bonaventure in a first four-game in 2018.

The players gathered around the court, did not have the same mindset as their coach as they eagerly awaited their fate. Rival USC, who swept UCLA in the regular season, only received a 6 seed and regular-season champion Oregon was seeded 7.

The Bruins held out until the end and the final first four teams were named. Fortunately, they heard those four letters as CBS announcer Greg Gamble announced they would be taking on Michigan State.

“The mood of the room was very stressful, very tense,” Bruins guard Jaime Jaquez Jr. said to the Los Angeles Times, “but once we heard our name called, we just had a sigh of relief and we were all just very happy.”

Unlike Michigan State, UCLA has no seniors on the team. No seniors also translates to, no NCAA Tournament experience.

Coach Cronin sees a new season within the tournament. Everyone is starting 0-0.

The winner will face the sixth-seeded BYU in the East Region on Saturday in Indiana.