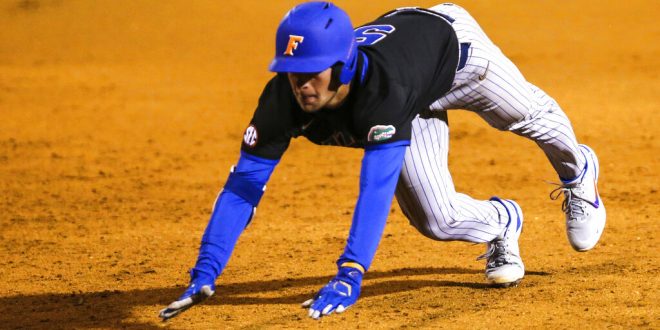 Florida Gators baseball suffers a crushing loss on the road to the Florida State Seminoles, 10-2. So, when will it be ok to finally say, Houston, we have a problem?

Pitching, in one way or another, remains the Gators’ Achilles heal. And the offense didn’t show up to even pick up the slack.

Game at a Glance

Florida State came out swinging and never stopped. Robby Martin slapped a shot off Garret Michlin over the right-field wall to make it 3-0 in the first inning.

The Noles topped their first-inning performance at the plate with four more runs in the seventh. Logan Lacey doubled to left-center to plate two. Then, Matheu Nelson and Parker Messick had RBI singles to make it 7-0 Florida State.

Heading into the fifth inning, the Gators had nothing happening at the plate. As a matter of fact, they were being no-hit until Kendrick Calilao singled in the fifth inning.

Once they got that first hit, the Gators strung a few hits together to end the shutout, making it 7-2.

Josh Rivera singles to center to score Jordan Butler. The #Gators are on the board, but they trail 7-1

Jacob Young single to left, bringing in another RBI for the #Gators. It’s 7-2 now

Unfortunately for the Gators, that would be it offensively.

Florida State wasn’t done in the meantime. Martin homered again to the same part of the field. This time, about 20 feet higher and over the stadium lights. Make that 9-2 Noles.

In the next at-bat, Nelson hit a moonshot of his own to cap off scoring for the night at 10-2.

Is This Team Ready for What’s Next?

Tonight flat out said, no. While the Gators have looked strong in a number of their games this season, when it has come to the tougher competition, they have fallen flat. Even against a 4-8 Jacksonville and a 6-6 Florida State, Florida could not get it together.

SEC play starts this upcoming weekend. The Gators are not where they want to be for it. Since they could not figure it out in the 18 games before conference play started, they will now need to do it during it.

The Gators start conference play this weekend against Texas A&M. The Aggies enter the series on an 11-game winning streak. Florida could make a statement by starting the series off by snapping it.

Harrison is a sports coordinator at ESPN 98.1 FM/850 AM WRUF. He served as a beat writer for Florida Gators football for the 2019 and 2020 seasons. He also contributes to WRUF's Gainesville Sports Center segments and makes appearances on the Clash on Harp on Sports. Harrison has been a content writer for WRUF since January 2019 as well.
@HarrisonSmaj
Previous Mullen Talks Spring Football Ahead of Saturday’s Scrimmage
Next Gators Fall to USA Softball in Exhibition